Featured Item V: J. Frank Dobie's GUIDE TO THE LIFE AND LITERATURE OF THE SOUTHWEST

J. Frank Dobie.  GUIDE TO THE LIFE AND LITERATURE OF THE SOUTHWEST.  Austin: The University of Texas Press, 1943.  111 p. Illus. 8vo. Light-grey printed wrappers.  Notes:  A handful of copies were issued hardbound.

Inscribed, “Dear Fred Rosenstock, This is the first edition.  It was given away by the Univ. of Texas Press.  The trade printing was made from identical plates by Southern Methodist Univ. Press.  Frank Dobie, Oct. 12, 1952, In Denver.”  Checkmarks and annotations throughout.
Dobie was a regular customer of Fred Rosenstock (1895-1986) one of the top Western Americana dealers in the country who had his store in Denver.
Donald Bower writes in Fred Rosenstock: A Legend in Books & Art, “In 1952 Fred arranged a lecture tour for Dobie that included the University of Colorado, the University of Denver, Colorado State University and Colorado State College at Greeley. ‘About five hundred people attended his talk at the University of Denver,’ Fred recalls, ‘and his subject was on the psychology of Western animals—mostly the coyote.  The lecture lasted one hour, but he was so fascinating it could have gone on all night.  The audience was mesmerized.  I remember that he had a big pocket watch, like the railroad men used to use, and he would pull that out and look at it from time to time.  He stopped on the dot of one hour and no amount of applause could make him go on.’”
“After Dobie returned to Texas he wrote an article for the San Antonio Light, in which he referred to Fred Rosenstock’s Bargain Book Store: ‘It is crammed with old books, some very rare . . . A person can learn an enormous amount by looking through books that he does not actually read.  I incline to judge the civilization of a city by its bookstores—or by their absence.  A genuine bookstore is far more than a house of merchandise.  As an asset of civilization, it is in the same category as public libraries.’”
“J. Frank Dobie, while not a collector in the technical sense, put together says J. E. Reynolds, a noted bookseller [see next copy below], ‘with loving care the greatest collection of books on the range livestock industry ever assembled by a private individual in this country.’  Dobie bought books from the Rosenstocks for many years, usually writing a letter and attaching a list of the titles he was looking for” (p. 139). 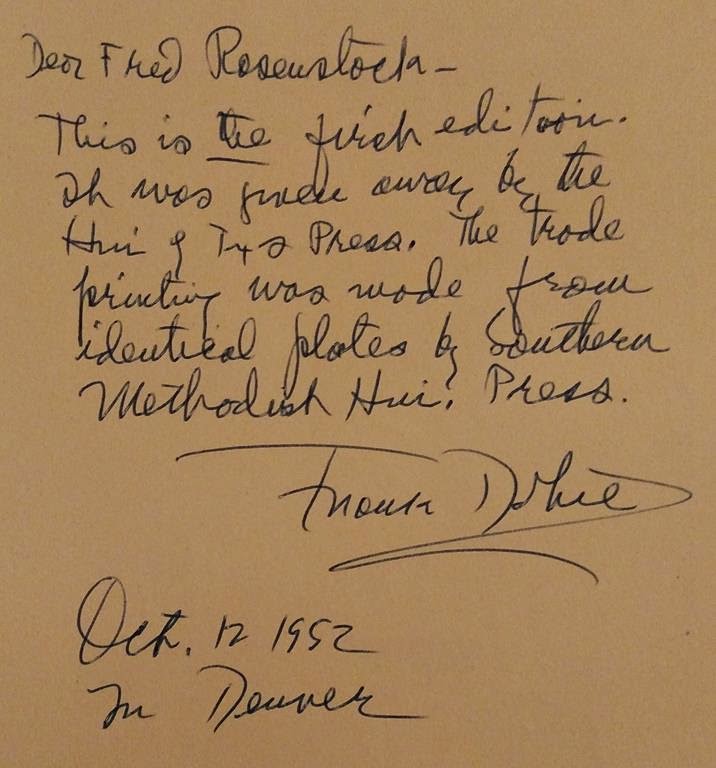 Inscribed, “Jack Reynolds -- I like to be quoted -- Frank Dobie, a su casa, 2/25/56.”  Bookplate of Dobie.
Bookseller Jack Reynolds knew Dobie well.  Laid in is a newspaper clipping describing a pamphlet issued by Reynolds, “For Christmas greetings to their friends [in 1958], Mr. and Mrs. Jack Reynolds of Van Nuys, Calif., printed and mailed an appreciation of J. Frank Dobie written by Lawrence Clark Powell.  Reynolds is a rare book dealer; Powell is head of the UCLA library and a writer and editor.  They are friends and literary admirers of Dobie, whom Powell calls the ‘best Southwesterner of them all, and. . . the givingest man I know,’ both in his books and in person.”
Reynolds is quoted in Donald Bower’s biography, Fred Rosenstock: A Legend in Books & Art, “’J. Frank Dobie, while not a collector in the technical sense, put together says J. E. Reynolds, a noted bookseller, ‘with loving care the greatest collection of books on the range livestock industry ever assembled by a private individual in this country.’” 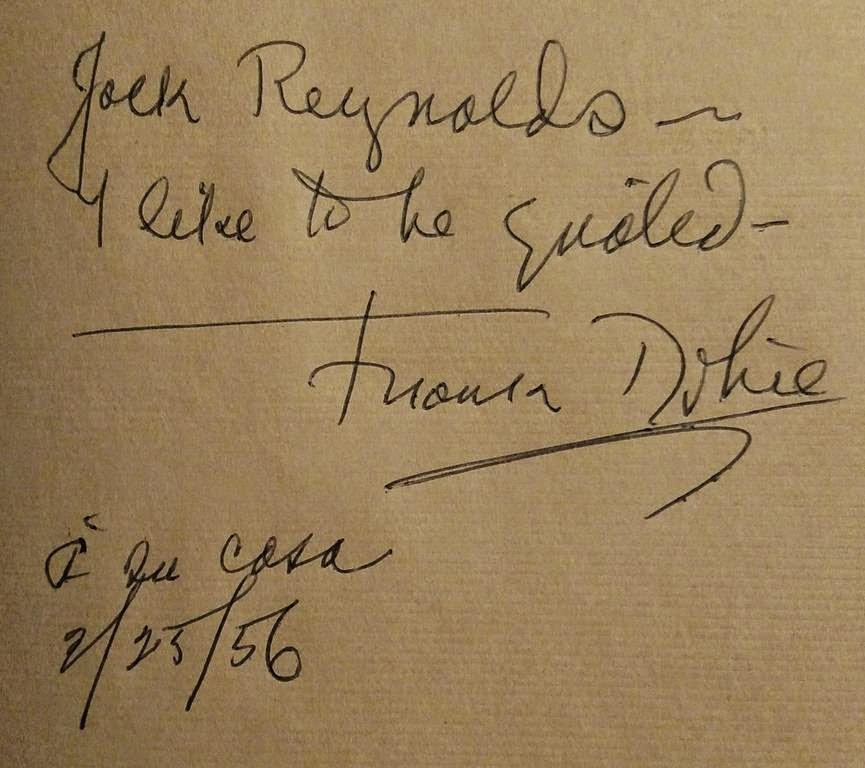 Posted by Kurt Zimmerman at 10:04 PM No comments: