Rare books don’t have a gender.  However, bibliographers do and the overwhelming majority has been male.  I’m a collector drawn to new paths and over the years I’ve gathered material related to early American women bibliographers active in the pre-WWII era before 1941.  My recent research on Henrietta C. Bartlett raised a deceptively simple question.  Who was the first American women bibliographer to compose a bibliography and have her name on the title-page?  The following essay attempts to answer that question and shed light on other pre-WWII practitioners.  I felt like an explorer in an uncharted jungle at times, machete in hand, hacking away but making progress.  I have little doubt I have missed a find or two in my exploration and welcome input.
The parameters of my search are bibliographies focusing on rare books and / or first editions. These would be of book-length or substantial pamphlets (no separates or offprints) and explicitly credit the woman bibliographer as author / compiler.   The definition of a bibliography demands some leeway as there are many different forms.  A simple checklist for example would not qualify in my hunt but a well-researched short-title catalogue might.
There are cases of biblio-women assisting with bibliographies (including some of the women noted here) who should have garnered a varsity position on the title-page but instead were relegated to an acknowledgement.  But that is another story beyond the present scope.
I contemplated saving the earliest located bibliography for last to heighten the intrigue but that just didn’t seem bibliographical.  So, let’s get to it.  The oldest example I’ve found is Nina E. Browne’s A Bibliography of Nathaniel Hawthorne (Boston: Houghton, Mifflin and Company, 1905).  The book was designed by Bruce Rogers and issued in an edition of 550 copies.  The publisher’s prospectus states that “It contains, along with the entry of Hawthorne’s published work, whether in book form or in old magazines or newspapers, everything that can be discovered in print about Hawthorne, in both books and periodicals.  Much pains have been given to the arrangement to make it as helpful as possible, both to the literary worker, and to the collector.” 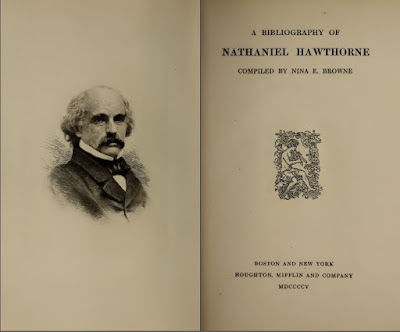