Sometimes you just have to take matters into your own hands.  Like Luke Skywalker in the original Star Wars when he blows up the Death Star using the Force to guide him.
This juxtaposition of science fiction and book hunting will become clear soon.  It all started after a very late night of Ebay searching followed by a chaser of Star Wars.  I grogged off in the recliner and didn’t awake until morning when my wife Nicole rattled me from my slumber.
It was Saturday morning so no rush.  I began breakfast and leisurely checked my email.  There was a notification from Ebay about an item ending soon.  My find from the night before was being offered at live auction by the National Book Auctions of Freeville, New York.   The book was an inscribed copy of Barton Currie’s Fishers of Books (1931), an autobiographical account of his collecting during the Roaring Twenties, and one of my favorite books.  (See my earlier blog posts about Currie.)  The cataloguer could not make out the name of the recipient because of Currie’s rather difficult handwriting but was kind enough to post a photo of the inscription.  I deciphered it and got that bookish tingle of excitement that stirs the dopamine levels.  My natural high shot to nerve-jangling heights when I clicked on the auction link and found out the auction was already in process!  The Currie lot would be coming up within the half hour.
I was disconcerted to say the least.  The burnt smell of my now forgotten bagels lingered in the air.  In my space fog the night before, I’d not only whiffed on the urgency of the situation but also forgotten to submit an absentee / snipe bid.  The only option left was to bid manually online during the actual auction.  I couldn’t recall the last time I’d bid at auction in some sort of live fashion—either in person, phone, or online.  I’d grown soft and lazy utilizing snipe programs or absentee bids.  A bead of sweat formed and I imagined a book hunting Darth Vader swooping in from who knows where to blast me out of the auction sky.
“Get a grip on yourself,” I whispered.  “This isn’t like you’re trying to knock down a Gutenberg Bible against Bill Gates.”
So, I made my run through that metaphorical canyon of the Death Star, my targeting computer off, the thought of a last minute internet crash pushed from my mind, and the Force strong as my lot came up and I opened the bid.  Resistance was immediate from a Stormtrooping floor bidder.  I kept firing away –click, click, click – until I had vaporized this unknown assailant and the book was mine!
“Not today, you bastard,” I yelled, “Not today."
“Everything okay in there?” my wife said from the other room.
“All is very fine, very fine indeed.”
A moment of silence -- “What did you just buy?”
A week later what I bought was in hand.  The presentation copy of Fishers of Books reads, “Inscribed for John C. Eckel, to whom I am indebted for some of the more fortunate adventures that have occurred in the course of my book hunting.  Barton Currie, Nov. 11, [19]31.” 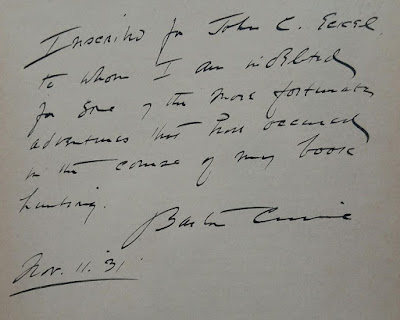 John C. Eckel, noted Dickens bibliographer, collector, and fellow Philadelphian, was a close friend of Currie.  Currie, inspired by Eckel, developed a strong Dickens collection and features it prominently in the book.  Currie mentions Eckel and his writings numerous times in connection with Dickens and recommends his bibliography.   Currie writes, “Even though you begin at the very bottom with a first edition (the book, not the parts) of The Mystery of Edwin Drood, hunt industriously until you discover a fine copy.  Before making this modest purchase, buy a copy of First Editions of Charles Dickens, by John C. Eckel (London: 1913), and seek also for the Grolier Club Catalogue of the Works of Charles Dickens.  Absorb all you can from these two valuable guides, then hit the trail” (p. 55).

Eckel’s bibliography First Editions of Charles Dickens, first published in 1913 was revised in 1932.  Eckel also wrote Prime Pickwick in Parts (1928) with an introduction by A. Edward Newton, a good friend of both Eckel and Currie.
Eckel maintained regular contact with many members of the book trade including prominent Philadelphia dealers A.S.W. Rosenbach and Charles Sessler.  He cited numerous other dealers and collectors for their help on both the first and revised editions of the bibliography.  The majority of Eckel’s library was sold by Anderson Galleries on Jan. 15-16, 1935 and scattered to the winds.
Eckel’s position of prominence and respect in the rarified book world of his time makes this an important association copy: not only sentimental for the friendship it highlights but also for its broader appeal as an important artifact in the history of American book collecting.
Now back in the present, a number of my friends have recommended I see the latest Star Wars spin-off Rogue One.  An excellent suggestion but you better believe I’ll be checking any potential auction bids closely before heading to the movie theater.

Postscript:
On a chilly morning a few days after my blog post, I received an email from Richard Gresh.  I didn’t know Gresh but discovered that his mutual interest in Currie had led him to my blog.  He collects the Cape Cod author Joseph C. Lincoln, a friend of Currie.  Gresh was kind enough to notify me that there was a Currie letter to Eckel for sale on Ebay.  (It turned out there were two letters.)  The letters were listed as “buy it now” instead of at auction so I hadn’t seen them.

I immediately swooped down like a Star Wars X-wing fighter plane at full throttle.  Within a few moments both letters were mine.  And what magnificent letters they are!  Each referred directly to Fishers of Books and the signing of a copy for Eckel.  The seller of the letters had nothing to do with the auction house where I got the book.  The serendipity of this whole episode reinforced my belief in a benevolent Book Deity.  In reality, it was a fellow collector generously sharing his knowledge with another.  I have found such camaraderie to happen frequently, unless of course one has an interest in the same item.  Amor Librorum Nos Unit.
Barton Currie’s letter dated Oct. 12, 1931, reads in part, “Dear Mr. Eckel:  Many thanks for your kind comments on my book [Fishers of Books].  I dropped in to [Morris] Parrish’s twice to sign your copy but it was not there.  I had a lot of fun writing the ‘opus’ but hardly thought it would have the spread of interest it seems to have developed. . . .”  Currie writes again in a different vein on Oct. 28, 1931, “You are a brave man to attempt to say anything good of my book after the reviews in the Saturday Review of Literature and The Publisher’s Weekly.  The latter calls it a dangerous book.  The reviewer works for The Brick Row Bookshop and I have one or two veiled references as to how I was almost bilked by [Byrne] Hackett [proprietor of The Brick Row].  But the Sat. Rev. of Lit. goes out of its way to be nasty. . .  Of course, I attacked the special pets of the review, and failed to include [Christopher] Morley as among the worth-while Americans to gather in, but I stated plainly enough that I reserved the right to collect whoever I damn pleased, and I never will include Morley. . . I’ll get in to Parrish’s in a day or so and write in your book.” 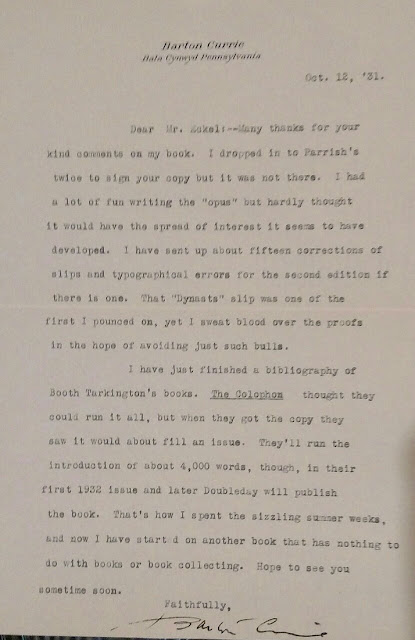 So indeed Currie did visit Parrish shortly after and inscribe the Fishers for Eckel now in my collection.  Morris L. Parrish (1867-1944), the mutual friend of Currie and Eckel, was a fellow Philadelphian and famous book collector.  Parrish focused on Victorian authors and was a condition fiend, allowing only the finest copies in their original state on his shelves.  In doing so he established the legendary “Parrish condition.”  Parrish wrote a number of ground-breaking bibliographies of Victorian authors, the most famous being Victorian Lady Novelists: George Eliot, Mrs. Gaskell, the Bronte Sisters, First Editions in the Library at Dormy House, Pine Valley, New Jersey, Described with Notes. (1933), limited to 150 copies.   His collection eventually went en toto to Princeton University.
And serendipitously yet again—to end my story with a gilting of the edges--I happen to already own a copy of Victorian Lady Novelists inscribed appropriately to Currie, “For ‘Fishers of Books’ from ‘Victorian Lady Novelists,’ 12th Sep. ’33.”

I am ready and willing for a sequel should it come.  May the Force be with me.
Posted by Kurt Zimmerman at 1:37 PM 3 comments: