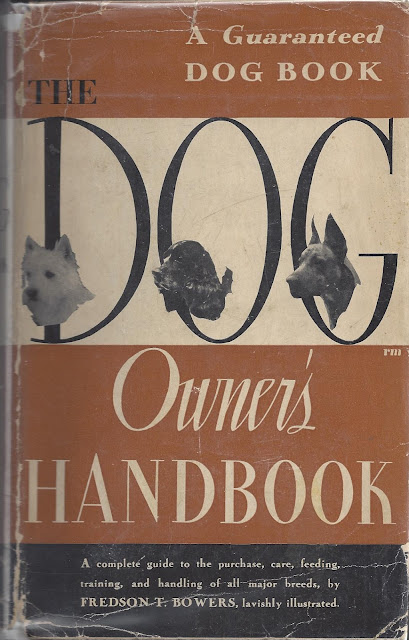 Book Hunters are a focused lot but they do find time for other pursuits.   Even the most dedicated need a break occasionally.  There are numerous examples of rare bookmen who write fiction, mysteries, even poetry with varied success.  But that is too close to the flame.   Rather let’s look at more diverse bypaths that flesh out the following bibliophiles' interests.  Naturally for my purpose these pursuits resulted in something printed.  The examples are from my own collection.  (The fact that I collect them certainly adds a layer of complexity to me which we shall not explore here.)
Formidable bibliographer Fredson Bowers tormented me early on via his Principles of Bibliographical Description (1949).   The work is as hearty and dense as German dark bread.  I was very much used to peanut butter and jelly on white bread.  So, choking down the Principles while taking a bibliography class in graduate school was healthy but unpleasant.   Negative thoughts of Mr. Bowers crept in.  Then I discovered a biographical essay of Bowers by his student and disciple G. Thomas Tanselle.  Tanselle confirmed Bowers’ intensity of purpose, his willingness to actively defend his scholarly views, his domination of the bibliographical and textual studies of his time.  But he also mentioned that Bowers liked dogs.  He liked them a lot as do I.  Bowers raised and bred them, particularly Irish wolfhounds, and became an expert in the field.  Bowers was so immersed that he wrote The Dog Owner’s Handbook (Boston: Houghton Mifflin, 1936), his first book, preceding any of his bibliographical publications. Tanselle notes that “The front of the dust jacket was labeled ‘A Guaranteed Dog Book,’ and the flap explained, ‘Any purchaser who is not satisfied with it may return the book within five days for refund’. . . The book had some success, for it was reprinted by the Sun Dial Press in 1940 and was still mentioned in the 1950s in some of the lists of recommended books that appeared in the American Kennel Club's magazine.”
I have a number of association copies of Bowers’ bibliographic works in my collection.  None gave me quite the thrill as finding a rare presentation copy of the first edition of The Dog Owner’s Handbook, the only example I’ve ever encountered. 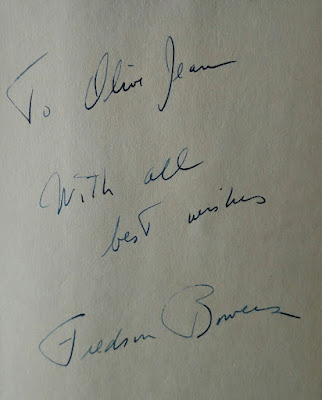