The Beinecke Brothers: A Yale of an Association Copy

The Beinecke brothers weren’t your average well-heeled alums looking to have a name on a building as a path to immortality.  Edwin J. (1886-1970) and Frederick W. “Fritz” (1887-1971) Beinecke were two of America’s most notable book collectors.  Their common love of books was supplemented by a long professional relationship working together in the various family businesses.   The two brothers, along with other members of the family, built Yale a new rare book library in the early 1960s.  The Beinecke Library at Yale is renowned for its holdings and groundbreaking modern design.
It is doubtful my brother and I will someday build our alma mater, The University of Texas—Austin, a new rare book library.  We are fortunate that UT’s Harry Ransom Center is already in place and frankly, unless we win the lottery and then do some Warren Buffett-style investing with that money the cash flow may come up a wee bit short.  Nonetheless, I can still relate to the brotherly camaraderie of collecting.  My brother and I collected a number of things together as youth; most notably a vast assemblage of beer cans still housed twenty-five years later in our parent’s attic.  I moved onward and upward to books and my brother has “collected” countries, having visited over 110 of them and counting.

Edwin and Fritz’s niece, Betsy Beinecke Shirley, daughter of younger brother Walter, wrote an account of the two men’s book collecting for the Grolier 2000: A Further Grolier Club Biographical Retrospective in Celebration of the Millennium (2000).  It is pertinent that she grouped the two brothers together as collectors and stresses the symbiotic connection between them.  (Betsy, by the way, assembled a superb collection of American children’s literature that would have made her uncles’ proud.   Yale once again benefited when she donated the collection to the Beinecke Library.)
A few nuggets about Edwin & Fritz drawn from Betsy’s essay will put my recent book acquisition in perspective.   She writes, “Both Edwin and Fritz lined the walls of their Manhattan offices with books. . . . My cousin Bill used to say that it amounted to book collecting on company time.  If you wanted to see his father or uncle on business, you’d better have an appointment and you’d better be brief.  But if you wanted to talk about books, you could drop in anytime and stay all day.”
She continues, “F. W. Beinecke was one of the great collectors of Western Americana.  In the early 1950s, just as another great Western collector, William Robertson Coe, was reaching the end of his collecting career, Fritz Beinecke was entering the fray of major Americana collectors.  He had always been interested in Western history and  had collected on a modest scale, but in the early 1950s he settled on the fields that most attracted him, the Plains and Rockies and the Spanish Southwest, an area that Coe, who collection formed the core of the Western Americana Collection at Yale, had virtually ignored.  Over the next twenty years and with the help of such legendary figures in the book trade as Peter Decker and Lindley Eberstadt, F.W. amassed what is regarded as one of the finest half-dozen private collections of Western Americana ever assembled.  Even though he was a partial invalid by the time Thomas W. Streeter’s collection was auctioned [1966-1969] F.W. dominated the early sessions, acquiring the last know copies in private hands of many a treasure of Southwest Americana. . . . His books and manuscripts have a permanent home at Yale, where they form the Frederick W. and Carrie S. Beinecke Collection of Western Americana.”
Fritz was somewhat of a late bloomer to serious collecting.  Not so for Edwin.   Edwin had a wide range of bookish interests and helped Yale assemble outstanding collections of pre-1600 Western manuscripts, papyri, incunabula, and various individual items of merit.  However, his first absorbing focus was Robert Louis Stevenson.  Stevenson’s classics such as Treasure Island, Kidnapped, and The Strange Case of Dr Jekyll and Mr Hyde apparently captivated Edwin early and often.  What eventually resulted was a monument to individual author collecting.
Betsy Beinecke writes, “E. J. began to collect Robert Louis Stevenson in the late 1920s, relying in the early years on Maggs Brothers in London and Thomas J. Gannon, Inc., in New York, as agents. [Dealer David A. Randall also sold him important material.]  He ranged far and wide in his search for Stevensoniana: he bought at the Jerome Kern sale in 1929, purchased Stevenson’s letters to Charles Baxter from the Savile Club in London, and managed to acquire more material from various members of Stevenson’s family.  Selections from the collection were exhibited at the Grolier Club in the fall of 1941, and while little remains to document that event, it was probably there that he first met Yale Librarian James T. Babb, an acquaintance that led finally to the construction and endowment of the Beinecke Library.”
This early enthusiasm for Stevenson and his book collecting acumen are displayed below in a 1932 letter in my collection from Edwin to Robert O. Schad, Curator of Rare Books at the Huntington Library, along with Schad’s insightful carbon reply.
Betsy continues, “By the time E. J. gave his Stevenson library to Yale in 1951, it was the world’s largest collection of its kind, with over eight thousand books, manuscripts, and letters by and about the Scottish author, supplemented by portraits—an oil by Girolamo Nerli, a charcoal sketch by John Singer Sargent, a bronze medallion by Augustus Saint-Gaudens—and such memorabilia as Stevenson’s penknife, his cigarette holder, and a pair of candlesticks from Vailima, the Stevenson home in Samoa.  Marjorie Wynne remembers unpacking the sixty-some crates when they arrived at Yale and arranging the epoch-making Stevenson exhibition that opened in May 1951 with a gala reception at Sterling Memorial Library.  George L. McKay, then librarian of the Grolier Club, compiled the six-volume A Stevenson Library: Catalogue of a Collection of Writings by and about Robert Louis Stevenson, Formed by Edwin J. Beinecke, which appeared as a Yale Library imprint between 1954 and 1964.”
This last named set was printed in an edition of 500 copies on quality paper, illustrated throughout, in a sturdy blue binding.  I recently purchased a set with an exceptional association.  It was a little above my comfort range price-wise, but I was fortified by an encouraging conversation with fellow collector, Douglas Adams.  “You’ll regret it if you don’t buy it,” he said.  He was right and I listened. 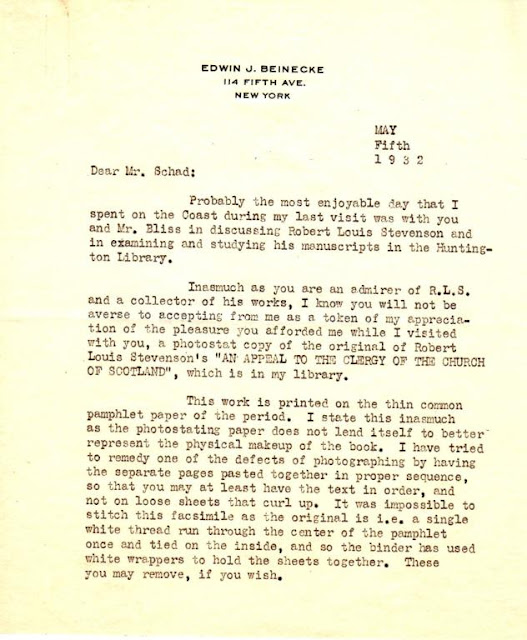 Posted by Kurt Zimmerman at 7:50 PM