Inscribed to Frederick B. Adams, Jr., “For Fred from Dave, Aug. 7, 1969.  It all seems far away and long ago.”  Bookplate of Adams.  Adams has marked various sections with annotated slips. Laid in is a copy of a TLs dated Jan. 24, 1973, from Randall to Reginald Allen at the Pierpont Morgan Library, discussing the acquisition of Gilbert & Sullivan material including reference to Carroll Wilson, and Randall’s thoughts on how a bibliography should be written.  Also laid in is the AB tribute to Randall by Michael Papantonio.  Adams delivered the main address at the gala dedication of the Lilly Library in 1960. 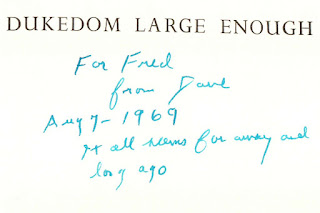 A companion piece, acquired separately, is an exceptional ALs from Adams to David Randall dated Paris, January 18, 1970, spurred on by Adams’ reading of the book:   “Dear Dave, I have just this afternoon finished Dukedom Large Enough. . . you have a lot of good stories to tell of men and books and you tell them damn well, without any pretentiousness, telling the bad with the good, and bringing back to me so many memories of old days and of wonderful people that we had fun with.  There were others too—Phil the literate bartender—Mrs. Clampitt, Sara Hay and others who entertained me if you were busy with a client when I dropped by—and a collector or two whom you didn’t mention, for reason of libel? . . . As to the introduction of Carroll Wilson and Waller Barrett, my memory runs this way.  CAW and Tom Streeter and I were working on the 100 Influential American Books [1947] and we had heard—through you? Through the Grolier Club?—that there was a youngish collector of American literature whose library might be worth looking into for some possible loans.  As I recall it, I made the date by correspondence, and in due course on a Sunday shortly after lunch Carroll and I descended from the Long Island RR train at Garden City to be greeted by a man neither of us had met before—C.W.B.  He took us to his comfortable but not grandiose suburban home, and our eyes were opened—bugged!  There seemed to be a whole room full of Henry James, and what’s more our host had read them.  He had a scattering of many authors, and by golly he knew exactly what he had and what he himself thought of it as literature.  The other thing I remember about the afternoon was the extraordinary number of children who seemed to be popping in and out irregularly, and assembled for tea, because we stayed on and on.  Obviously this was a collector after Carroll’s own heart—that was the beginning.  Some day we must ask Waller how he remembers it.  And what did Waller lend to the glorious 100?  One book certainly, which was included in the show at his insistence, W. G. Simms The Yearnassee. He already owned, I am sure, the country’s finest Simms collection, doubtless reinforced since then.”
Posted by Kurt Zimmerman at 8:13 PM