Herein lies a story English bibliophile Thomas Dibdin himself would be proud of telling.  That it involves his book Bibliomania (1811) would certainly make him all the more enthusiastic (a quality he never lacked in abundance).  A primary character in my story is a mighty book collector so famous in Dibdin’s lifetime and beyond that he inhabits the rarified biblio-Pantheon as a legendary figure.  The story also is footnoted with both English and American auction sales, an early 19th-century American book collector in Savannah, Georgia, a Grolier Club member, ex- library markings, and Ohio booksellers. 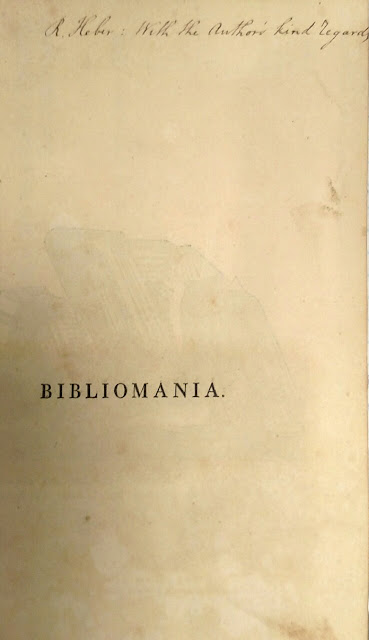 Smets (1795-1862), a Frenchman by birth, arrived in the United States at age 21 and became a successful merchant in Savannah.  He was a founder of the Georgia Historical Society.   Noted collector Charles C. Jones, Jr. of Georgia wrote in a 1894 biographical sketch, “Mr. Smets was an intelligent bibliophile, and Mr. Tefft [of Savannah] an ardent lover of autographs. The collections of both became important, and they are now well remembered. A careful student of the English language and of its literature, and a lover of books, Mr. Smets for many years devoted considerable sums to the purchase of rare editions, and the accumulation of choice volumes. As the natural result of this effort, long before his death he became the possessor of the most valuable private library in Savannah. Within the quiet walls of his study he spent much of his time. Here he delighted to welcome his literary friends, and here many strangers who came to view his treasures were pleasantly entertained. Of this library he prepared and printed an interesting catalogue. After the war his books were disposed of at public auction in the city of New York.”
The auction referred to was The Catalogue of the Private Library of the Late A. A. Smets. . . NY: Leavitt, Strebeigh & Co., Auctioneers, May 25, 1868.  The book was lot 619.  (The lot number is penciled on the ffep.)  The book then founds its way into the collection of Robert S. Williams (1828-1899).  It bears his bookplate on the front pastedown. 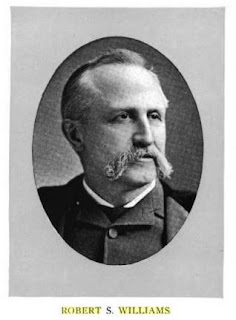 Williams was a Utica, New York, businessman and bibliophile.  I have found little about his collecting activities.  However, he was an early member of the Grolier Club (1887-1899) until his death.  (Notably, his son John Camp Williams [1859-1929], was also a Grolier Club member, and a well-known collector of Americana, book illustration, and English literature.  The son’s collection was auctioned in 1929.  See Dickinson’s Dictionary of American Book Collectors.)  Of particular importance in this instance, Robert Williams was president of the Utica Public Library.  The book bears a Utica Public Library bookplate noting the donation of the book from the estate of Williams.
The book then remained in the Utica Public Library for an undetermined amount of time before being deaccessioned.  Internal evidence suggests it was there until at least the 1950s-1960s.  There is a small stamp on the rear free end paper “Librarian’s Office” and a label, “For Reference: Do Not Take From This Room.”  Both Williams bookplate and the donation bookplate have the Williams named purposefully effaced but remain otherwise intact.  This suggests that the book was deemed expendable at some point, but the fact it was originally donated by a prominent area family / early library president was not to be trumpeted.
The book then entered into the collection / stock of Columbus, Ohio bookseller, Paul H. North, Jr., who was active from at least the early 1950s.  About twenty years ago, Ed & Tina Hoffman of Hoffman’s Books in Columbus purchased approximately 80,000 books and pamphlets from the estate of North.  The Hoffman’s are still digging out nuggets from this massive horde.  Among them was this copy of Bibliomania.
I have purchased a number of biblio-books from the Hoffman’s over the last decade.  They know my interests.  So, it was a fortunate day in late October of this year when Ed Hoffman contacted me about the Dibdin.  Thank you, Ed!
The book retains its original binding of full calf with blind-tooled and gilt-framed covers and a gilt-stamped spine with raised bands, all edges marbled.  Internally, the book is very clean with only a couple of mild Utica library markings.  The time at the library was not kind to the binding, both boards are loose and at some point a hapless librarian used library tape (now removed) to secure the spine but overall it remains a proud specimen.  Hoffman suggested it might be a candidate for a rebinding but I think not.  I’ve made a neat mylar jacket that holds all in place and next will be a custom box.
Your book will be well taken care of during my custody, Mr. Dibdin & Mr. Heber. Rest easy in book Valhalla.
Posted by Kurt Zimmerman at 9:52 PM