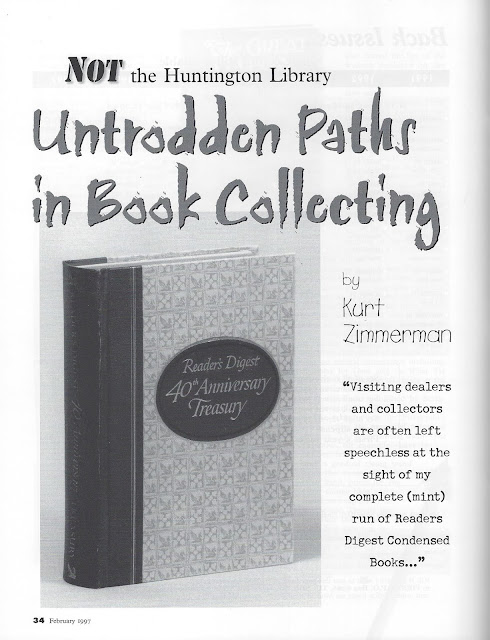 A recent visit from collector and bookseller Kevin Mac Donnell resulted in a wide-ranging conversation meandering down many paths including an untrodden one.  His recollection of my brief book collecting guide written over two decades ago gave me pause.  The essay originally appeared in the February 1997 issue of Firsts: The Book Collector’s Magazine.   I had forgotten all about it.  I wrote the piece while working at Butterfield & Butterfield auction house.  My effort was inspired by a combination of sorting thousands of estate sale books, a particularly encouraging book department staff, and a then recent reading of New Paths in Book Collecting (1934).  My guide was surprisingly never reprinted, nor has it been available online.  A re-awakened combination of guilt and angst over this situation calls for rectitude.  Who am I to be so selfish, to hoard such knowledge from the greater book world, to prevent future collectors from drawing on the bonanza of my experience?  So, here it is as written with the original illustrations.  Timeless wisdom needs no revision.


There are many potential areas of collecting that seem to be inexplicably overlooked by most collectors.  I have for decades quietly been assembling a world-class collection in these categories, unchallenged by competitors.  Perhaps, as one knowledgeable and trusted book dealer pointed out, I am just ahead of my time.  Be that as it may, I have decided with some reluctance to reveal these “untrodden paths in book collecting” to my book collecting brethren.  The hidden guilt I have felt for years, knowing that I alone have been able to experience these pleasures of the chase in these areas, spurs me to write.  Although I shudder for a moment at the thought of prices skyrocketing after this article appears, I find solace in the fact that I already own just about everything in the field (many in duplicate), and a rise in price would be, from my current perspective, quite a welcome one.  The following areas or authors are fertile ground for the uninhibited collector.

A gold mine for bibliographical studies.  One can spend hours comparing the original book with the condensed version, absorbing the nuances involved in excising needless subplots, characters and thousands of words of text.  They also make an impressive display if you have no Sangorski & Sutcliffe examples in your library.  Visiting dealers and collectors are often left speechless at the sight of my complete (mint) run filling the walls of the living room and both bathrooms.  Complete runs are becoming very difficult to assemble due to the frequent use of the books as toilet paper in rural areas.  As a related side note, I was actively involved in the establishment of the Reader’s Digest Clearinghouse, a nonprofit agency that tracks and investigates any reports of people who may have actually read a condensed book.

An absolutely wide-open field with a quickly shrinking supply of fine material as Goodwill stores shortsightedly dumpster their vast holdings.  Like George Brinley, the great Americana collector of the 19th century, I too travel the backroads of America trading kitchen utensils, gold bullion and free cases of beer for elusive Book Club titles residing in attics of unsuspecting homes.  Nearly every one of the 14,000 titles I own is very fine in dust jacket, and unread as issued.

A poet vastly underrated and unappreciated by the literati, judging by the number of copies of his works found in every used bookstore’s poetry section.  This pervasion indicates a large and loving following.  He surely qualifies for a front row seat in the sport we call collecting.  My own collection, humbly noted as the greatest ever assembled, contains every known manuscript, primary work, periodical appearance and secondary work, as well as such marvelous ephemera as his toothbrush and jockstrap. I don’t believe I’ve ever paid over two dollars for a first edition or manuscript, although I anticipate a rise in prices shortly.

BOOKS GIVEN AWAY FOR FREE

For collectors with small budgets this is an ideal area.  Many free books tend to be spiritual in nature and provide the double pleasure of nourishing the soul as well as feeding one’s collecting hunger.  I have collected them religiously for more than 25 years and now have approximately 42,000 volumes (including duplicates).  Although I would never recommend collecting for investment, this is one area ripe for such speculative ventures.  In all my years of gathering free books, not once have I been turned down when I asked for an extra copy or two (or sometimes a whole stack).  A true collector must be savvy and open to such opportunities.

I must point out that I am not referring to the already hotly contested field of Star Trek-related books (Leonard Nimoy’s I am Not Spock, and William Shatner’s Tek series, for example).  These are obvious works and already collected.  The core of my television personality collection is centered around poetry.  Two cornerstone books must be noted for the budding collector: Richard “John Boy” Thomas’ Poems (1974) and Suzanne Somers’ Touch Me (1973).  Both capture the essence of the actor or actress in a rhythmic, commercial-laden style heretofore unknown in literature.  I can say with some pride that my copies of these books are inscribed and have rare signed 8-by-10 glossies laid in (Somers is in a delicious polka-dot bikini). 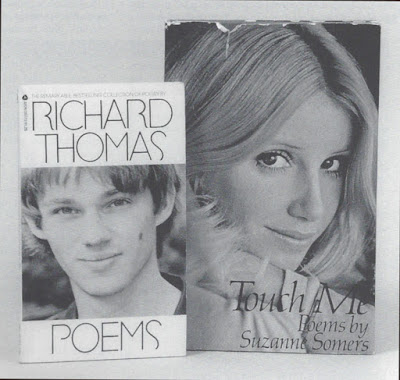 One would be amazed how easily dealers part with broken sets.  It is like shooting the proverbial fish in a barrel for a collector like me.  I understand the average collector’s philosophy about desiring a complete set.  There is nothing wrong with this.  But if one sets his sights a bit lower, say settling for 75 percent of a complete set, one can acquire a collection nearly as complete as a completist’s at minimal cost (for now).  Of course, if I manage to complete a set by accidentally buying the missing odd volume later (with a collection of over 7,000 broken sets this happens occasionally), I immediately trade it for another broken set so as not to ruin the uniformity of the collection.

This is an area that must be trod upon lightly, but it can be quite satisfying.  Any honest collector or dealer must be scrupulous to note that their ex-library copies have “Withdrawn” or “Duplicate” stamps (preferably perforated) present, as well as evidence of card pockets removed (with attendant glue residue), library identification stamps and markings, and library bindings where present.  A word of advice to the beginning collector who sees the frequent notices of library book sales and hungers to build his ex-library collection:  Avoid the first day of the sale.  It is this first day, especially at the opening, were evil lurks in the form of ravenous book scouts, highbrow dealers in disguise, college students, genealogists and retired people.  The stampede when the gates open is certainly something to be seen, but not to be part of.  Elbows fly, language is reinvented, books are torn asunder and the cries of hapless, overwhelmed library volunteers are drowned in the ensuing melee.  Be an astute collector and wait until the final day of the sale.  Then you can roam freely and pick up not just individual volumes but whole bags of books for as little as a dime.  These extras can be traded for other ex-library copies from around the globe.  To give one an idea of what can be accomplished, there are now more than 4,200 libraries, public and private, represented in my collection.  A few prized volumes include “Bexar County Jail Library,” “The I Spy Collection of Richard Nixon,” and “Texas A&M Library of Solid Waste Studies.” 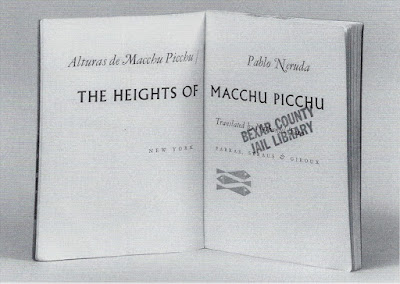 Perfect for the busy collector who would like books delivered directly to the home, negating bothersome and time-consuming trips to actual bookstores.  The anticipation that builds as I wait for my monthly Time-Life delivery is something all collectors should have the opportunity to savor.  Although some of you may already receive Time-Life books, very few collectors seem to realize their full collecting potential, given the majesty and sweep of their contents.  The key to collecting the various Time-Life series is to keep them hermetically sealed in the original shrink wrap.  Don’t even take the books out of the shipping boxes.  Remember, condition is everything, especially to collectors of modern first editions.  An average copy of a Time-Life book is usually touched and perhaps even glanced at, but your copy will remain pristine and desirable.  If you are tempted by a copy that has been exposed to air, handled or, God forbid, read, hesitate not a moment longer upon the inviting photographs and delicious captions but cast the book from you as if the plague itself were embedded within the supple imitation leather.

To emphasize this point in stronger terms, a personal story:  I once owned a Time-Life book on Mississippi heavily annotated by William Faulkner with his name signed (neatly) on the title-page.  Being early in my collecting career, I naively thought that his lengthy notes might add something to the book’s desirability.  A close friend and true book aficionado quickly explained how a book so marred and removed from perfection, even by a hand such as Faulkner’s, loses any collectible value.  I immediately gave him the book to dispose of and didn’t give it a second thought.  With a kindness rare in today’s world, he replaced it with a mint copy the very next day.

BOOKS IN LANGUAGES I CAN’T READ

As any real book collector knows, the ability to read a book in one’s collection is inconsequential.  With this in mind, the possibilities become endless.  I currently have more than 20,000 books on unknown subjects by unpronounceable authors in a variety of languages I can’t read.  It gives me great satisfaction to gaze upon these books and imagine what is in them.

I started this collection at the kind suggestion of my wife.

I should not end without paying homage to my great-grandfather and book collector, Ebenezer Zimmerman.  From him I inherited a fine collection of Shakespeare folios and quartos—many in the original bindings.  Having no real interest in Shakespeare myself, I have been able to trade most of these books to enthusiastic dealers and collectors for a good portion of the material detailed above. I am sure that were he still alive, he would be proud to see how creatively I’ve carried on the collecting tradition in our family.

I hope this glimpse at my collection has spurred an interest in these neglected areas and perhaps inspired new ones.  With a little intuition and foresight, a collector can truly find his own “untrodden paths in book collecting.” 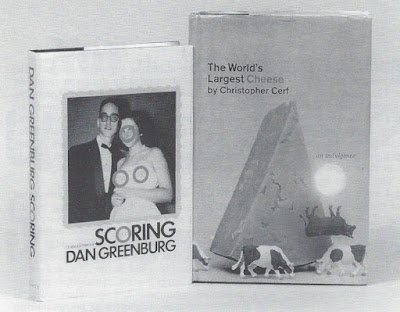 Posted by Kurt Zimmerman at 2:17 PM