In the Midst of It: A Book Hunter Down the Cataloging Rabbit Hole 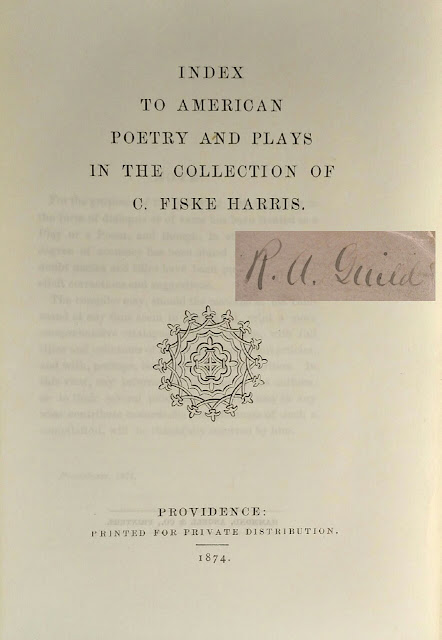 The story begins with a drowning, includes a fratricide, a sensational trial, and has no ending yet.  But let us start anyhow.
Prominent book collector C. Fiske Harris and his wife are both recovering from illness in 1881.  They decide to take a recuperative canoe ride with their servant Hedges on Moosehead Lake in Maine.  The canoe capsizes in rough water “and for a time the Harrises clung to the craft.  Hedges heard Mrs. Harris say, ‘If Mr. Harris goes, I will go also.’  She succumbed first, however, and Harris followed her.”  Thus quoted from Roger Stoddard’s authoritative essay, “C. Fiske Harris, Collector of American Poetry and Plays” (1963).
This abrupt and tragic demise of a notable collector is not yet on my mind as I prowl the aisles of the recent ABAA Book Show in Pasadena, California.  I am nearing the end of my Saturday all-day scout, my eyes strained and the need for food urgent.  Serendipity comes into play as I browse the booth of Holly Segar and Jeffrey Rovenpor of Caroliniana Books, Aiken, South Carolina.
Propped up on a shelf in a sleeve is a modest looking pamphlet, plain original wrappers, with a neat ownership signature on the cover.  I almost miss it, but I don’t.  Holly & Jeffrey’s description reads, in part: “Index to American Poetry and Plays in the Collection of C. Fiske Harris.  Providence, RI: Printed for Private Distribution, 1874. . . Finely printed pamphlet listing the major American poetry and play collection belonging to C. Fiske Harris.  The collection today resides at Brown University. . . This copy with the ownership inscription to front wrapper of R. A. Guild.”


Neither Holly nor Jeffrey is available to chat, so I continue to other booths, but I remain intrigued, the biblio-wheels spinning slowly then building up speed as the importance of the item soaks in.  I return a short time later and buy the Index from Holly.  I ask her where they found this elusive item.  She doesn’t recall off-hand, but Jeffrey will be returning to the booth soon.  And he does.  He and I haven’t met before, but he knows me through my blog.
“Reading your blog posts inspired me to buy this at the Papermania show in Hartford.”
I am momentarily flummoxed.  (I like that word.)
He continues, “This is the first time we’ve had it out on display and in the back of my mind I thought by chance if you were here you might want it.”
Well, Mr. Rovenpor, the Book Gods certainly put us together in one of those unexplainable instances that happens occasionally to dedicated collectors.  But next time, let’s not tempt fate and just quote me directly.
New friends made, I carry my prize off to show to a few other book people who would appreciate it, including Joe Fay & Nick Aretakis of Reese Co. and Bill Butts of Main Street Books.  For what fun is it if one can’t share with others?
I have big plans for a blog post about Harris’ Index.  Upon reviewing Stoddard’s essay on Harris, I realize much of the heavy lifting has already been done.  A shorter excursion is very much in order though.  During the journey, I’m buffeted by a deluge of unexpected discoveries and find myself gloriously deep in uncharted territory and I push on wondering where it will all lead.  Come with me.
The importance of Harris’ Index is summarized by Stoddard, “In March of 1875 there was issued privately in Providence a small pamphlet which was without precedent in the annals of American bibliography. . .  it credited Mr. Harris with 4,129 volumes in a field almost totally unexplored by scholar or collector.  Harris’s contemporaries in the book world were historians and collectors in the field of American history, and it would be another decade before successors with Harris’s inclination toward his native literature could appreciate his foresight and achievement.”

C. Fiske Harris (1818-1881) is certainly a biblio over-achiever.  He attends Brown University but pursues a business opportunity and doesn’t graduate, goes to New York City in 1837, makes his fortune, and returns to Providence, Rhode Island twenty years later, settling into an expansive home with his wife near the Brown campus.  His home is filled with books in almost every room.  Horatio Rogers writes in Private Libraries of Providence (1878), “Go where you will in Mr. Harris’ house, you will find books.  They long ago overflowed the library proper, which holds but a small portion. . .  They stand upon shelves: they are stacked in piles: they are packed in trunks and boxes: they are shut up in closets: they are bundled up in paper; and they are huddled on the floor.  The owner has no idea of their number, and the writer estimates that there are, at least, 8,000 volumes and 5,000 pamphlets.”  It is surprising to me that Harris remains married. 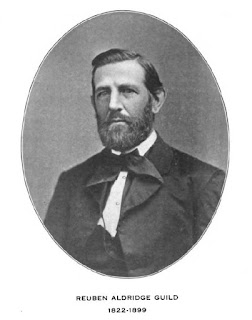 The Harris collection numbers approximately 5,000 volumes in 1884.  An early endowment provides acquisition funds and a lengthy honor roll of curators nurture and build the holdings over the next one hundred and thirty-five years.  The collection now contains approximately 250,000 (!) volumes and is unique in scope and effort. 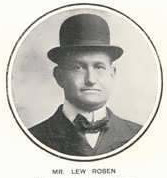 Here is an entirely unexpected twist that has Rosenthal (as Lew Rosen) arrested by Anthony Comstock himself, the infamous anti-vice activist, United States postal inspector, and secretary of the New York Society for the Suppression of Vice, who is dedicated to upholding Victorian morality.  The trial is a landmark one.
Josh Lambert writes of Rosenthal and Comstock in Unclean Lips: Obscenity, Jews, and American Culture (2013), “Comstock’s greatest legal triumph in the regulation of printed obscenity would be the Supreme Court’s upholding of the conviction of one ‘Jew editor’ in 1896, a judicial decision that defined obscenity in American constitutional law for half a century.  Comstock deliberately and cunningly pursued this editor; whose name was Lew Rosen.  Under a false name, Comstock dispatched a letter in April 1893 to the magazine Rosen edited, Broadway, a ‘witty New York society journal,’ complaining that he had received the recent issue but that ‘some boy or printer’s devil has been playing a joke on you, as the paper on three pages is marred with a black substance marked over them.’  ‘There has been no practical joke played on you at all,’ one of Rosen’s employees quickly replied, following instructions from the editor.  ‘It is only lamp black. . . and is easily removed with a piece of bread.’  When Comstock scrubbed away the grease, he discovered beneath it what the court later referred to as ‘pictures of females, in different attitudes of indecency.’  Comstock testified against Rosen, and the latter was convicted and sentenced to thirteen months at hard labor for sending obscenity through the mail.  Rosen appealed his conviction all the way up the judicial ladder, but the Supreme Court finally upheld his sentence, condemning Rosen to jail because his aim had been, as Justice John Marshal Harlan wrote, ‘ of course, to excite a curiosity to know what was thus concealed.’”
And then I discover that bookseller Edmund Bonaventure, profiled by Rosenthal in The Curio, has years earlier in 1883 been prosecuted by Comstock for selling racy prints.
But it really is getting late now, and I’d rather not be sitting here when the sun rises.  My mind is full.  A straightforward cataloging of my chance find in Pasadena has become a surreal plunge through known and unknown; a drowning, a murder-suicide, famous and forgotten bookmen, a brush with the underbelly of the late 19th century book trade, and a desire to learn more about the intriguing Lewis Rosenthal, aka Lew Rosen, Max Maury, and “The Grolierite.”
Would it surprise my readers that before bed I’ve already hunted down and ordered an inscribed Rosenthal item and a complete set of The Curio?