The Trials and Tribulations of a Woman Book Collector

In the early 20th century American book collecting reached the peak of its popularity.  Not coincidentally, A. Edward Newton wrote a number of inspirational books about books during this time, the most famous being The Amenities of Book Collecting (1918). The vast majority of inspired collectors were men.  Women book collectors in fact have always been fairly rare.  Did women—although heavy readers--just not collect books or were there barriers preventing them from participating at the highest levels?   One contemporary woman collector was bold enough to express her feelings in print tinged heavily with frustration.  Genevieve Earle’s essay described below first appeared in the August 1933 issue of Charles Heartman’s magazine, The American Book Collector.  Earle published the essay separately in a now very scarce pamphlet as a Christmas greeting.  The format was modeled after similar pamphlets issued yearly by A. Edward Newton. 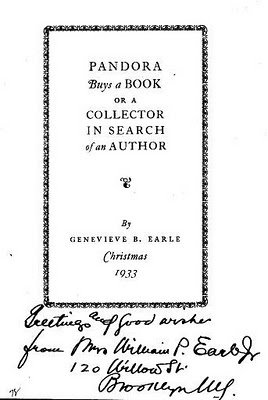 Inscribed, “Greetings and good wishes from Mrs. William P. Earle, Jr., 120 Willow St., Brooklyn, NY.”
A. Edward Newton’s writings captivated Genevieve Earle like so many others and soon she was busy collecting his works.  She details her pursuits and the trials and tribulations that followed.  She writes, “[Newton’s] books exhale a delight more violent and contagious than those of any other writers about books—they are the greatest menace to the bank account I know of.  One may not look into them with impunity—once one does, a new collector is born, full-armed like Athene, from the brow of Jove. . .  Ever since, I’ve had an exciting time with books, bookshops, auction sales, etc., but never once have I seen or heard of a woman book-collector.  Where do women book-collectors keep themselves?  Have they no clubs, no haunts, no rendezvous?  The Land of Bibliophilia must be the Garden of Eden with the Adams in complete possession of all their ribs.”
Her frustration mounts as she is denied access to a Grolier Club talk by Newton because her host becomes sick and without him her invitation is withdrawn.  She does leave a copy however of This Book Collecting Game which Newton inscribes.  He also corresponds with her and this inspires her continued pursuit of Newtoniana.  She is denied meeting him again when the all-male Carteret Book Club hears him speak, and later when he talks to the all-male Rembrandt Club.  She is resigned to send her husband to the Rembrandt Club and have him get one of her Newton items autographed.  “I could not help lamenting bitterly that in this world of men’s Grolier Clubs, Carteret Book Clubs, etc., there seems to be no warm corner for the woman book-collector. . . Recently I heard Dr. Rosenbach discuss in a fascinating way women as book collectors; but his ladies were dear, dead and gone, --Kings’ Mistresses, Queens and Princesses of Yesterday.  Is it possible that in this most gorgeous field of hobbies, we have left you, my Brethren, an uncontested domain?  Will the gate be forever barred to us?  Strange, for it seems to be the one fine leisure interest men and women can pursue together.”
Genevieve Earle’s book collecting frustrations went largely unheeded for decades.  An exception was the Hroswitha Club, established in 1944 as a parallel organization to the Grolier Club for serious book women but membership remained small and segregated.  However, things have evolved today and the once all-male clubs such as the Grolier Club, the Caxton Club, and others, have many active women members.  In fact, the Grolier Club recently elected Carolyn Smith its first woman president (2002-2006). Smith is a collector of Churchill material.
Earle (1885-1956) was too far ahead of the book collecting game to reap all the opportunities now available.  She did keep collecting and a small archive of her Emily Dickinson material is found at Ohio State University.  Her papers are at Columbia University.  In her professional life, her energies produced greater results.  She became an influential social worker and the head of the Brooklyn branch of the League of Women Voters. In 1937, she was the first woman to be elected to the New York City Council, where she served as minority leader of the body.  A brief speech she made on “The Job of Citizenship” can be read and heard here:  http://thisibelieve.org/essay/16524/
I’m sure Genevieve Earle now resides in Book Valhalla as all past dedicated collectors do, smiling in satisfaction at the turn of events as she hunts one more elusive tome.  As for Eddie Newton, he appreciated women collectors like Genevieve Earle, Amy Lowell, Carolyn Wells, and his own daughter, Carolyn Newton, who inherited a spark of her father’s book collecting gene.  Newton also recognized the role his wife played in his collecting life and he dedicated to her The Amenities of Book Collecting: “If, as Eugene Field suggests, womenfolk are few in that part of paradise especially reserved for book-lovers I do not care.  One woman will be there, for I shall insist that eight and twenty years probation entitles her to share my biblio-bliss above as he has shared it here below.  That woman is my wife.”    The inscribed dedication copy is preserved in my own collection.

Posted by Kurt Zimmerman at 3:39 PM