Featured Item No. I: Arnold's FIRST REPORT OF A BOOK-COLLECTOR. 1/85 copies

I thought it might be entertaining and (perhaps) enlightening to post selected items from my collection on a regular basis.  Each will feature a description of the work.  Keep bookin'.  Kurt Zimmerman


William Harris Arnold.  FIRST REPORT OF A BOOK-COLLECTOR; COMPRISING:  A BRIEF ANSWER TO THE FREQUENT QUESTION “WHY FIRST EDITIONS?” WITH SOME REMARKS ON THE COMMON SUPPOSITION THAT MERE SCARCITY IS A REASON FOR COLLECTING THEM; AND FIVE EGOTISTICAL CHAPTERS OF ANECDOTE AND ADVICE ADDRESSED TO THE BEGINNER IN BOOK-COLLECTING: FOLLOWED BY AN ACCOUNT OF BOOK-WORMS. Jamaica, Queensborough, New York: Printed on the Marion Press, 1897-1898.  xi 97 [2] p. Frontis., plates, illus., facsimiles, inserted leaves, two folded leaves in pocket at rear. Small 4to. Original stiff vellum, spine stamped in gilt, custom slipcase.  Limitation: No. 51 of 85 copies, signed by the printer, Frank E. Hopkins.  Also signed by Arnold at the end of the foreword.  Notes:  A second, less elaborate edition, limited to 220 copies, was published in 1898.


Arnold’s self-indulgent romp through book collecting is a delight both in content and presentation.  He provides concise and finely-tuned advice, drawing upon examples from his own collection.  Facsimiles of title pages and inscriptions abound.  To illustrate restoration and repair Arnold had inserted examples of an original mended leaf from Fabian’s Chronicle, 1559, and an original foxed leaf, one half cleaned, from Roger’s Italy, 1836.  Adding flavor are two original “worm-drilled” leaves from a copy of Froissart’s Chronicles, 1525, a close-up photograph of a bookworm, a photograph of Bernard Quaritch commissioned specifically for this book, an original Quaritch catalogue cover, and a rare photographic image of an auction in process at Bangs Auction Rooms in New York City taken for the book at the Sewall sale, Nov. 12, 1896.
Arnold writes of First Report in his autobiography, Ventures in Book Collecting (1923), “When I had collected books for about a year and a half I had the presumption to write an essay entitled ‘Why First Editions.’  I was driven to this by the inquiries of friends who looked upon my new pursuit as a foible. . . I advised with Frank Hopkins, who, as it happened, was about to install a hand-press in the attic of his Long Island home.  Mr. Hopkins suggested that I write something to accompany the essay; so soon I had ready ‘five egotistical chapters of anecdote and advice’ and a little article on bookworms. . . The Marion Press, the title chosen by Mr. Hopkins for his little establishment, brought out [the book], a sumptuous tome, printed by hand on handmade paper and bound in spotless vellum.  It had unusual illustrations, not the least of which was a collotype of a bookworm magnified thirty diameters, the first picture, so far as I know, every made by photographic process of any of these wee creatures” {He goes on to quote a letter of appreciation regarding the book from Bernard Quaritch].
This was Frank E. Hopkins’s first commissioned work for profit, and unwittingly turned his leisure hour recreation printing into a full-time job.  Hopkins was Theodore Low De Vinne’s right-hand man at the time.  When Hopkins’s after hours press work came to De Vinne’s attention De Vinne gave him a friendly ultimatum—but an ultimatum nonetheless--don’t mix business with pleasure, or go on your own.  After much deliberation he took a leap of faith and established the highly successful Marion Press named after his daughter.
We are fortunate to have Hopkins first hand account of the book’s production.  Hopkins writes in The De Vinne and Marion Presses: A Chapter from the Autobiography of Frank E. Hopkins (1936), “Mr. William Harris Arnold, a most discriminating collector of fine books, next came to the front.  He had written a short account of his experiences while collecting [First Report], and suggested that I print it for him at a fair price.  I hesitated all summer.  Hitherto my work had been a labor of love, and I had not made a cent profit above the cost of materials.  I asked Mr. Arnold to let me take it to the De Vinne Press, as I was not a professional.  No, he replied, he had written it just to have a specimen of my hand-press work, and he wanted to pay for it because he had no right to ask me to do it for nothing.  If I did not print it, it would not be done at all.  Looking at the matter from his point of view, I was won over.  It had been designed as a thin octavo of about fifty pages, but as the work progressed Mr. Arnold enlarged on his text, added a chapter on bookworms, and inserted many unusual illustrations.  When the book was completed and bound also in vellum by Mr. Campbell [of the De Vinne Press], it presented so rich and important an appearance that I was frightened.  I felt in my bones that trouble was brewing” (p. 54). 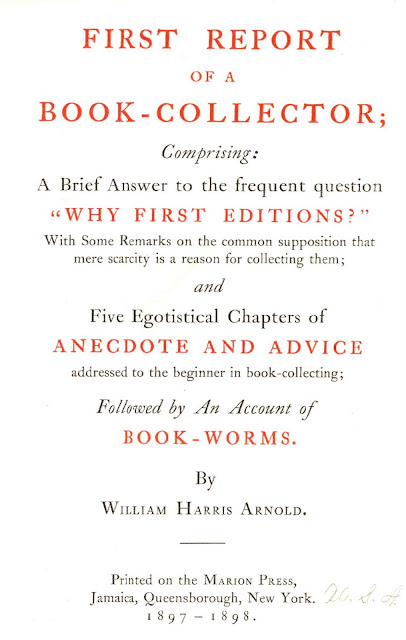 Posted by Kurt Zimmerman at 2:21 PM