Barton Wood Currie (1877-1962) best captured the spirit of the 1920s Golden Age of book collecting in his witty and insightful Fishers of Books (1931).  Currie transcended much of the bibliophilic genre with this highly personal account of his development from naive enthusiast to seasoned veteran. 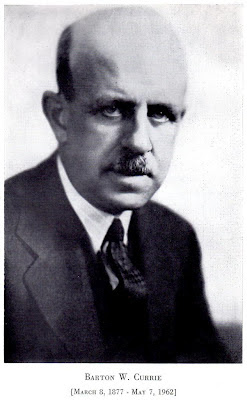 Currie, an editor and reporter by trade, freely admitted in Fishers to an unbridled passion for book collecting but managed to retain a healthy skepticism and modicum of objectivity as he recounted his collecting adventures.   In the heat of his passion, Currie bought great books and manuscripts at large prices from the top dealers.  He did not have the finances of a Huntington or Henry Folger but much like his friend and inspiration, A. Edward Newton, was able to compete at the highest levels for well-known works.    Unlike Newton, Currie’s ardor for collecting expensive material cooled after the Wall Street crash of 1929.  Financial issues played a part but Currie’s growing aversion to book trade practices and over-hyped salesmanship was a significant cause of this change of focus.   However, he never gave up his passion for books and “rode his hobby” to the end.  Let’s first background the man himself before we take a closer look at the contents of Fishers of Books.
Currie started out as a reporter in ca. 1905 for Joseph Pulitzer’s New York Evening World working under the notorious “editor-tyrant” Charles E. Chapin.   James Morris records in his book The Rose Man of Sing Sing (2003), “At the heart of Chapin’s news-gathering operation remained his prize rewrite team.  Barton Currie was his star.  ‘He could take a bare handful of semi-statistical notes and turn them, on demand, either into a tensely dramatic or roaringly funny column story,’ said [Albert Payson] Terhune.”
A  1907 Currie article published in Harper’s Weekly is still frequently cited for its historical value depicting the early movie theatres.   Titled, “The Nickel Madness” it gives a flavor of his reporting style.  (http://www.digitalhistory.uh.edu/historyonline/nickel_madness.cfm)
Currie also found time to co-author a mystery novel Officer 666 (1912) that had a successful run in the play version and was made into a movie.  Pictured is a first edition in the rare, elaborate dust jacket illustrated by James Montgomery Flagg. 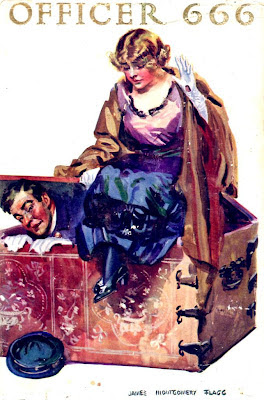 Currie moved up the professional ranks, wrote for Good Housekeeping (1909-1911) and assumed editorship of Ladies Home Journal.  He later became editor of Country Gentlemen.  The popularity of these magazines in the 1920s was reflected in a monthly circulation in the hundreds of thousands.  In 1928 he joined Doubleday Doran as the editor of their business magazine World’s Work.  During this time, he continued to write numerous articles on a huge variety of topics.  One offbeat book stemming from his editorship of the Country Gentleman was The Tractor and Its Influence Upon the Agricultural Implement Industry (1916).  I found a copy in the rare jacket long ago. 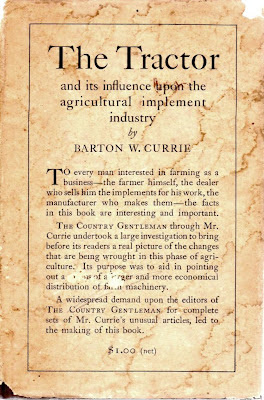 Currie’s leadership role at the magazines gave him a strong background in advertising and marketing.  This experience spilled over into his book commentary found in Fishers of Books.  He was well-read, funny, and opinionated.  He knew lots of the movers and shakers of his time and had plenty of stories to tell.  Currie would have been a great dinner guest.  I find little information about his wife, Florence, but judging by the famous frontispiece of Fishers of Books, she must have been a patient soul who appreciated his passions and sense of humor. 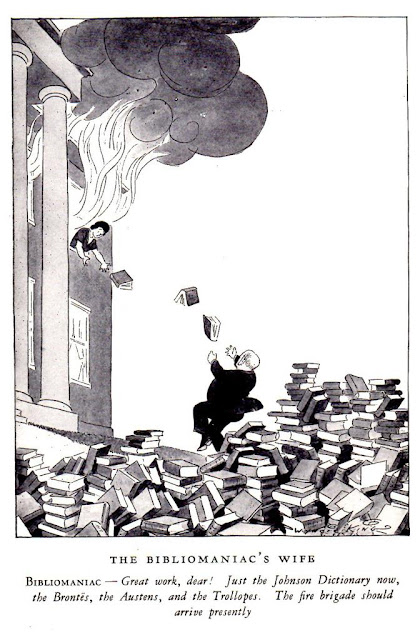 Now, let’s take a closer look at Fishers of Books.  Currie covered a lot of ground and covered it well.  The early chapters, “The Beginning Urge,” and “How Collections Happen,” explored the mysterious process by which a book reader becomes a collector.  Currie wrote, “[The collecting bug] happens to you and you have it.  You are unaware of its approach.  The germ is even more cunning and stealthy than the love germ.  With love you have warnings and a tingling awareness, and the early symptoms are exalting.  The first symptom of bibliomania, however, is much more subtle than love.  It anesthetizes.  It manifests itself by producing a form of somnambulism.  You come out of a bookshop carrying a first edition of something or other.  You cannot explain how or why you got it, or what you paid for it.  But you have it; and when you arrive home with it you creep off to some secluded room and examine it.  Then occurs the first little burning exaltation.  Just a little glow to begin with, then by infinite gradations a consuming fire.”

So what became of Currie’s books?  David Randall records in Dukedom Large Enough (1969) that Currie sold a number of his best items privately through Scribner’s in the 1940s and 50s.  His much loved Sheridan manuscript of A School for Scandal went to Robert H. Taylor and later to Princeton with Taylor’s collection.   After Currie’s death in 1962, the remains of his collection was sold at Parke-Bernet Galleries, May 7 and 8th, 1963.  In the auction catalogue are many of the books he writes about in Fishers of Books.  The Conrad material drew particular attention – a post mortem vindication of Currie’s interest.   Books from his collection continue to surface at irregular intervals within the trade.  I’ve been fortunate to acquire some tasty bibliographic association items pictured below.