Rosenbach & Huntington: "No Epilogue Nor Sequel"


My book motor runs pretty hard with plenty of gusto.  However, refueling is required from time to time.  I usually do this by re-reading a favorite book about books which rarely fails to rev up my imagination.  No less importantly, the process usually sparks my acquisition mode.  I’m currently a third of the way through Edwin Wolf & John Fleming’s Rosenbach (1960), the best biography of a bookseller, and arguably the best book on the antiquarian book trade ever written.  The subject, Dr. Abraham S. W. Rosenbach (1876-1952) was a complex figure with a book motor that can only be described as supercharged (and apparently fueled by daily infusions of whiskey).  Wolf & Fleming, former employees of Rosenbach, describe him as “an eye-twinkling, hard-selling, hard-drinking, scholarly bookman.”
This isn’t a book review so I’ll let you discover (or re-discover) the book yourself.  Pertinent to this post is the fact that Rosenbach was instrumental in building the collection of railroad magnate Henry Huntington (1850-1927).  Rosenbach began to sell Huntington books in the early part of the century but things hit full stride from 1920 until Huntington’s death.  Rosenbach facilitated the transfer of millions of dollars of bookish delights to Huntington’s shelves.  The material ranged from Americana to English Literature to Incunabula to Portolan Atlases.  Huntington is remembered for buying entire private libraries in big gulps using a strategy akin to the building of his vast railroad empire.  This large-scale book buying strategy was driven in the 1920s by failing health and his intense desire to form a library of international stature.  Huntington set up a nonprofit educational trust before his death establishing the Huntington Library, Art Collection and Botanical Museum.  Today it is a bucket list stop for book lovers.  It mustn’t be forgotten that Huntington was an enthusiastic bookman as well, not just a check-writing philanthropist. (Even Huntington, with almost unlimited wealth, bought so many books he overheated his budget and had to sometimes use railroad bonds and/or short-term payment plans to cover purchases.  I can relate on an infinitesimally smaller scale).  He and Rosenbach when possible would pour over auction catalogues together for hours, talking books, prioritizing individual lots and establishing bids.
This all leads me to two copies of a book in my library, Rosenbach’s Books and Bidders (1927), a classic collection of somewhat embellished but always entertaining book essays. 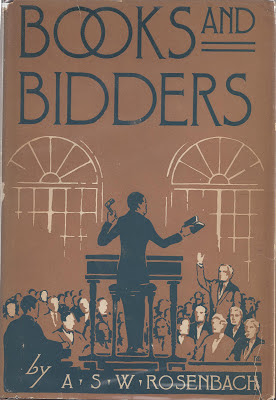 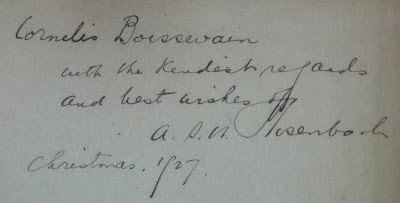 Cornelius Boissevain worked for Rosenbach and was responsible for a near disastrous foul-up involving Henry Huntington.  Wolf & Fleming write, “Two more lists of incunabula [were sent to Huntington in 1924] from the Richter collection of Berlin, which [Lathrop] Harper had offered to the Doctor on an equal-share basis, and another culling of dealers’ shelves on both sides of the Atlantic. . .  This time there occurred a slip which might have changed the life of Abraham Simon Wolf Rosenbach.  While the Doctor was in Philadelphia, the books were being checked and listed in New York.  With the lists were the bills from the various dealers covering the items included, which were to be sent back to the bookkeeping department in Philadelphia. . . . An assistant, the young Dutchman Cornelius Boissevain, packed up the shipment.  And in a moment of incredible aberration, he enclosed the bills from the dealers in the letter destined for the Huntington Library.
“To Mr. Huntington’s librarian, [Leslie] Bliss, who was continually scrutinizing lists, prices, and invoices to catch the Doctor in a minor error, those bills would have been the malicious chance of a lifetime.  Dr. Rosenbach never denied that he made a handsome profit, but it was another matter for a valued customer to have chapter and verse on how handsome that profit was.  When the Doctor got over to New York the next day, the awful blunder was reported to him.  For half an hour he raged and swore like the devil incarnate.  By the end of the next half-hour he had made arrangements for an unexpected trip to San Marino.  If he was to retain Huntington as a client—in fact, if he was to remain the king of the rare book world—he had to get to California before that letter did.  For the first time in his life he conquered his innate physical cowardice and risked traveling in a plane.
“No word came back from the Coast except that he had arrived. . .  Ten days later, the Doctor, travel-worn but relaxed, walked into the Madison Avenue store.  To the obvious question, he responded with his most charming grin and laconic statement, “I got there just in time.  It cost me over a thousand dollars.”  [Rosenbach paid Hapgood, a Huntington employee and friend, to retrieve the letter/bills.]
“Boissevain, certain that he had not been fired only because there had not been time in the rush, waited for the word uneasily.  It was characteristic of the Doctor that no such word was given.  Furiously angry he could get, but understanding of human frailty and forgiving he was, too.  When Boissevain, recovered from his shock, asked a few weeks later if it was not time he got a raise, Dr. R looked him in the eye and with the same charming smile asked blandly, ‘Do y’think you deserve it?’” 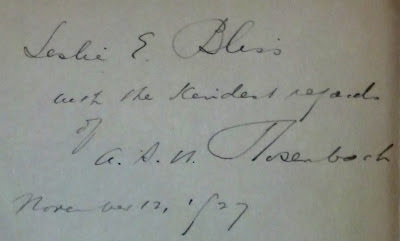 Bliss was the chief librarian of the Huntington Library.  He and Rosenbach had a tumultuous relationship.  Wolf & Fleming write for example about Rosenbach’s offer in 1922 of Simon Gratz’s important collection of early American imprints to Huntington, “Leslie E. Bliss, who was acting as watchdog for Mr. Huntington, replied that they had eighteen of the books, including the best of the New England ones, and suggested that Dr. Rosenbach buy the whole lot, keep the duplicates, and sell the rest for $40,000. . . [Rosenbach] always found it more difficult to get on with the professional assistants of collectors than with the collectors themselves.  He resented the intermediacy of a third party in what he considered arrangements between two dedicated book lovers, where books rather than dollars were the major concern.  When Bliss shortly thereafter complained that a Western book which had cost $8.00 commission had been misleadingly catalogued and told the Doctor he ought to examine books of this kind as carefully as he would Elizabethans, his answer but lightly veiled the bitterness that he felt.  It must have  been a bad day for Dr. Rosenbach’s assistants, and his opinion of Bliss must have crackled through the room sulphurously.  On paper he wrote, ‘Your suggestion that we send a representative to examine Western items as closely as I would look at Elizabethan ones interested me.  Perhaps you do not know that Western books were my first loves and we were the first booksellers in American to deal in them on a large scale!’”

Wolf & Fleming document a number of other run-ins between Bliss and Rosenbach.  One pertains to the publication of this book.  On May 17, 1927, Henry Huntington died and Rosenbach was greatly upset at the loss of his friend and client.  During this time period the editor Ellery Sedgewick of Little, Brown, proposed publishing a collection of Rosenbach’s articles under the title Books and Bidders.  “[Rosenbach] was still in the gloom caused by Huntington’s death.  When he asked for a photostat of a Christmas book in the Huntington Library for one of his articles, he received a haughty answer from Bliss, ‘According to a rule recently adopted here it will be necessary before we can make a photostat copy for you of the Christmas Carolles to know for what purpose you wish the photostat made.’  So far as Dr. Rosenbach was concerned, the Huntington chapter was to have no epilogue nor sequel.”