It’s a long stretch from 18th century England to early 20th century California but for a bibliophile the journey is an easy one.  A recent serendipitous purchase on Ebay spanned the time and distance in short order.  The book bought was a 1925 edition of Thomas Gray’s An Elegy Written in a Country Church-Yard printed by John Henry Nash of San Francisco for collector William Andrews Clark, Jr. of Los Angeles and Butte, Montana.  It is an elegant production limited to 200 copies and designed as a Christmas gift for friends of Clark. Clark fortified his biblio-eggnog with a lengthy foreword tracing the history of the work’s publication.  He writes, “Having in my library the first eleven separate editions of the Elegy, it may be of interest to note herewith the changes in the text as they successively appeared compared with the text of the first edition.”  No light sing-along caroling here for friends—this was a serious bookman at work.  For good measure he provided a separate facsimile of his copy of the first edition of 1751.
I acquired the book because it was described as having not only the printed presentation slip normally encountered but also a personalized inscription from Clark.  The limitation statement indicated that this was copy no. 1.  Clark inscriptions in the wild are quite uncommon and this example showed promise for my association collection.

The book arrived, the package hastily unwrapped. The volume slid carefully from it's slipcase. . . a look at the inscription, “To Dear Sophie, with my love & affection.”  A previous online search of Clark’s immediate family had yielded no Sophie.  Then I went through the book itself (as the seller had not) and on the printed dedication page I found:  “To Sophie Braslau This Volume. . .  Is Dedicated with Admiration.”
The Dedication Copy!  My wife in the next room wondered what my throaty exclamation was all about and why I’m suddenly drinking a five-star craft beer at 10:30 am.  I have other dedication copies in my collection, but there is always space for one more. 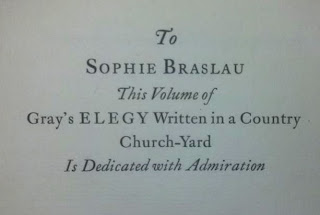 It turns out Sophie Braslau (1892-1935) was a prominent contralto singer in American opera. The Clark Library archives record correspondence with her.  Wolf & Fleming in Rosenbach note that in 1929, “Clark, on his way [to London], stayed in New York long enough to buy a rare London incunable and a Bourdelle bronze for the singer Sophie Braslau, and to phone Harry Hymes [of Rosenbach’s] for a bottle of whisky which was taken over to his hotel post haste as part of the service a rare book establishment was expected to offer.”

Braslau’s exact relationship with Clark—platonic or not-- will require further research but the acquisition got me thinking more about Clark’s life and his collecting. His highly successful public endeavors were intertwined with a complex and often tragic personal life.
William Andrews Clark, Jr. (1877-1934), son of a Montana copper baron and U.S. Senator, had no cash flow problems.   In the face of such easy material living and the temptation for dissipation and squandering, he retained an admirable focus on achievement.  Just as importantly for posterity, he developed a philanthropic nature.
Clark, born in Montana, received a varied and high quality formal education in Europe at a very young age.  His first language learned was actually French and he was a lifelong Francophile. He later attended public and private schools in New York, California, and Virginia where he graduated with a law degree from University of Virginia.  After a short stint as a lawyer he joined the family copper business in 1901.
His father, although a reader and book lover, focused most of his collecting energy on art.  However, William’s older brother, Charles Clark, was a devoted bibliophile and provided inspiration and encouragement, introducing him to notable booksellers such as George and Alice Millard of Pasadena, George D. Smith of New York City, and A.S.W. Rosenbach of Philadelphia.  (The Clark brothers, “Charlie” and “Willie,” are featured prominently in Wolf’s 1960 biography of Rosenbach.)
Will Clark began collecting around 1909 in haphazard fashion buying American literature, English literature, French books, books on tobacco, fine bindings, and fine press books.  In 1911 he made a purchase from bookseller E. Byron Hostetter of Boston-- a selection of works by Oscar Wilde including The Ballad of Reading Gaol (1898)-- that eventually would culminate in one of the finest single author collections ever assembled.
From the late Teens until the Great Depression of the early 1930s when copper prices sank into oblivion, Clark was all in when it came to the rare book collecting game.  He was very interested in 17th and 18th century English literature, poetry, and culture.  A world class John Dryden collection anchored this area.  Tempted by availability, unburdened by financial restraints in the Roaring Twenties, and influenced by Charlie’s similar interest, he succumbed often in the field of Elizabethan and Jacobean drama.  The result was a superb collection peppered with rare Shakespeare quartos and the Four Folios in multiple copies.  He also gathered other important book and manuscript collections of early printing, later English literature, French material, Western Americana, and Fine Press books including complete runs of the Kelmscott and Doves Press.
Although Clark’s wide-ranging library had superficial similarities on a smaller scale to that of his mighty book collecting neighbor, Henry Huntington, Clark approached his hobby in a vastly different fashion.  Huntington had a habit of swallowing whole collections.  Clark, with few exceptions, had no interest in this approach.  He turned down an extensive collection of Joseph Conrad offered in 1926 by Byrne Hackett of the Brick Row Book Shop in New Haven and wrote, “This particular disinclination I have to purchase the collection is that I find more pleasure in picking up the books. . . item by item and not a collection en bloc.  It gives me far more enjoyment and I can familiarize myself in this way more thoroughly with my books.”
His personal life was filled with regular sorrows.  Will Clark would lose two wives and his only child.  His first wife, Mabel, died in 1902 only a month after giving birth to his son, William Andrews Clark III, nicknamed Tertius. Teritius would be killed in a plane crash in 1932.  Clark married his second wife, Alice, in 1907.  The family moved to Los Angeles shortly thereafter where the Clarks became rooted to the community.  Alice died in 1918 and Clark, just past age 40, never re-married.  All this upheaval certainly intensified his book collecting and fostered his other major interest in music as a source of relief.  Music was his connection to Sophie Braslau.  Clark was an accomplished violinist and in 1919 organized and underwrote the Los Angeles Philharmonic Orchestra with whom he occasionally played.
It was in 1919 that Clark also hired renowned California bibliographer, collector, and book dealer, Robert Ernest Cowan, to assist in cataloging and developing his quickly expanding library.  What was originally intended as a six-month project turned into a fourteen year employment for Cowan and the formation of a close friendship.  Kevin Starr writes in Material Dreams, “Clark paid Cowan a thousand dollars a month, an extraordinary salary in that era, and provided him with a home near his own.  Cowan dined almost nightly in the Clark household. . . Los Angeles now had its own accomplished bibliographer in residence.”
Many years ago I bought a special copy of Michael Sadleir’s groundbreaking work, Excursions in Victorian Bibliography (1922) with Will Clark’s bookplate.  I hold it now.  The inscription reads:  “To Robert E. Cowan, my most estimable librarian & co-worker, with expression of my personal esteem, William A. Clark, Jr., 9/9/1922.” 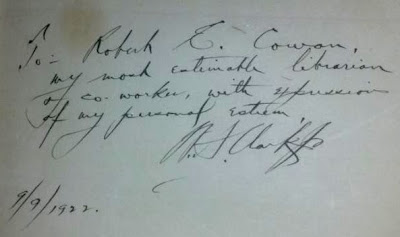 With the expertise of Cowan and the help of two other library assistants, Cora Edgerton Sanders and Harrison Post, Clark produced a twenty volume private library catalogue between 1920-1931 of his holdings (eighteen volumes describing material and two index volumes).  The catalogue itself was a high quality fine press production printed by John Henry Nash of San Francisco.  Clark also issued eleven limited editions printed by Nash focusing on specific books and authors in his collection such as the Gray volume inscribed to Braslau.
Clark participated heavily in the production of the volumes, contributed introductions, and oversaw the descriptions and printing.  Few other prominent American collectors have ever been involved so intimately and extensively in the publication of their own library catalogue.  It’s obvious that Clark had a bibliographical bent.  He took public pride in his accomplishments and wished to record them for posterity. Also, his brother Charles had earlier produced a privately printed catalogue of his library using Nash as printer so Will had that for motivation.
All collectors innately strive to create order with their collections.  Clark’s strivings were over-sized.  Perhaps this hyper-productive activity was a result of trying to bring order to inner turmoil, to normalize his public persona in contrast to a personal world marked by tragic losses and untidy desires in an age not so open as today.
And this brings us to Irish writer and poet Oscar Wilde (1854-1900).  Wilde was Clark’s first major author collection and it remained foremost throughout his collecting career.  Six volumes of the eighteen of his library catalogue are devoted to Wilde books, manuscripts, letters and miscellanea.  Clark relentlessly chased and cajoled Wilde material from all the major book dealers, at auction sales, and from personal associates and family members of Wilde.  But why was he obsessed with Wilde?  What drew Clark to his works and the man himself in such a strong fashion? 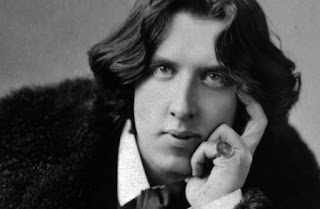 
Notes on sources:  The best sources on Clark as a collector are William Conway’s essay, “Books, Brick and Copper: Clark and His Library,” in William Andrews Clark, Jr.: His Cultural Legacy (1985) and Joseph Rosenblum’s essay in the Dictionary of Literary Biography, Vol. 187: American Book Collectors and Bibliographers (1997).  Dickinson’s Dictionary of American Book Collectors (1986) lists other important sources including the Powell article.  An online search will pull up interesting tidbits.

Link to the Clark Library:  http://www.clarklibrary.ucla.edu/
Posted by Kurt Zimmerman at 7:06 PM