Douglas Adams—friend, book scout, bibliophile, and collector of literary forgeries—is having a mighty fine lunch break.  We can imagine a burger or burrito hastily consumed to leave plenty of time for a scouting stop.  Priorities in order.  After a quick smoke, he steps into a run-down antique store on Westheimer Avenue in Houston, Texas, for a look around.  It’s hot as hell outside and inside isn’t much better.  You sweat so much in the humid air you think you’ve just been swimming.  The building is older than much of the material within:  furniture, rugs, paintings, household items, and smaller knick-knacks.  An item almost missed in an overflowing display case draws our intrepid book scout. Almost is the key word because Douglas misses very little while on the hunt, and he is always on the hunt.  This display case yields a real beauty—a find so rare and marvelous that the book’s acquisition is the kind of story swapped among bookmen for years to come.  But first it must be bought.  There is no price and a helpful lady at the store, glad to see something go, quotes $50.  Douglas is so excited he forgets to bargain.  He has to tell somebody and I’m lucky enough to get a phone call shortly afterwards.
“I just found something really good,” he says.
“What?  Run of Playboys with centerfolds intact?”
“Nada.  How about the first city directory of Houston, 1866, in original boards, with the map.”
There is a pause on my end as my mind kicks into high gear (I can hear my wife laughing while reading that).  Early directories of major cities are highly sought-after and normally expensive.  They’re also rare because they were thrown away over the years like old phone books.  The information found within such directories—people, businesses, the advertisements, etc.—is all primary source material for historians and the curious. In this instance, the book itself is a treasured relic from the embryonic beginnings of a burgeoning metropolis now over two million strong.
“Damn,” I reply, “that is a good one.”
“What do you think it’s worth?”
“More than $50.  How about I double your money right now?  Heck, I’ll even throw in free pick up.”
He ungraciously turns down my offer and emphasizes the rejection with a colorful expletive.


“Okay,” I say, “Let’s get serious.  I’ll do some research on my end and you do the same and let’s talk tonight.”  Douglas and I have a symbiotic book relationship so I’m always willing to participate in such ventures.  I then imagine him lead-footing his car back to his office, one eye on the road and one eye on his new book baby.
I immediately set aside my real estate work to investigate this gem.  Priorities in order.  A fuller description:  W. A Leonard, compiler.  Houston City Directory for 1866, with a Map of the City, Directory to Streets and Localities, Names of City, County and State Officers, Provisions of City Charter, Compendium of Ordinances, Courts, Post Office, Railroads, Steamboats, Churches, Societies, and Almanac for 1866, together with an Appendix, containing the Names of the City Officers from 1838 to 1866, Historical and Statistical Sketches of Houston, and Articles on Topics of Local Interest. Houston, Texas:  Gray, Strickland & Co., 1866. 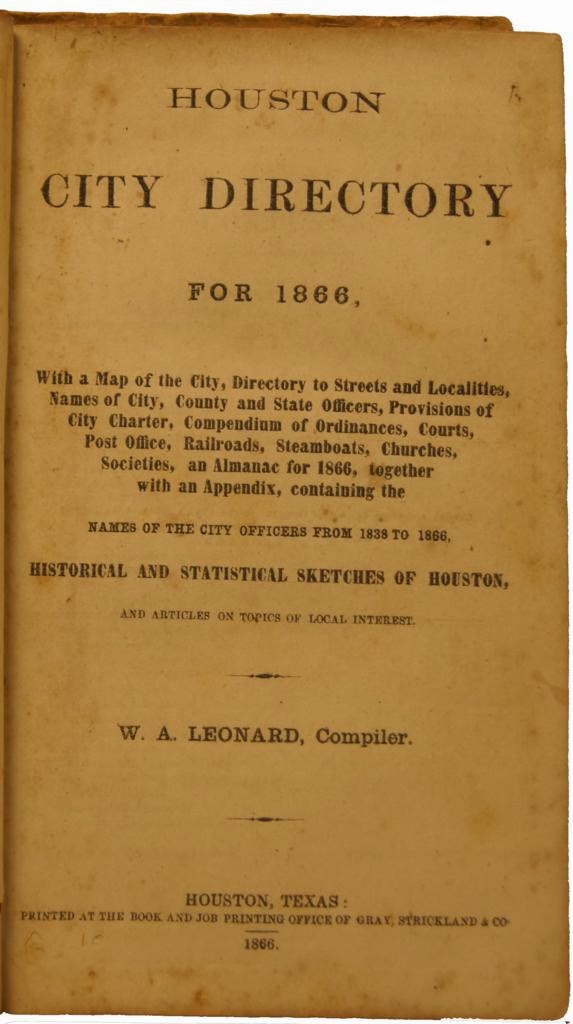 Leonard writes in the preface that “this is the first work of its kind ever issued in Houston” and goes on to state that 1,500 copies were produced.  He adds, “The amount of labor bestowed upon the publication can hardly be appreciated by those unacquainted with the publishing business.  This labor, together with the necessity of sending our map to New Orleans for lithographing, on account of the lack of an artist of the kind in our own city, has been the cause of the delay in the appearance of the work.”
My preliminary research locates only six surviving copies in libraries (at least one lacking the map).  I find no copies offered for sale in the trade or at auction in the last thirty plus years.  Douglas confirmed my findings in his own investigation.  The book is indeed, muy raro.
“Sell it or keep it?” I ask later that evening over the phone.
“I want to sell it,” he says.
No surprise there.  Douglas isn’t trying to form a rare Texana collection himself.  He would like to find it a good home and pad his book account.  Douglas has enough dealer in him to not get too attached.  I am, on the other hand, a highly distilled collector by nature and most of my stuff, even the few miscellaneous high-spots worth ready cash, remains classified as “long-term” investments.  I’ve made a few exceptions over the years but this is usually to fund another book purchase more specific to my interests.
“I’ve got a few ideas for buyers,” I say.  My background in appraisals and the book trade often provides a base of potential clients for high-end items.
“What do you think it’s worth?” he asks.
“That is a tricky one with no previous sales.  Maybe somewhere around $6-8,000 retail?”
“That’s what I was thinking generally,” he replies, “I don’t need to squeeze every nickel out of it since I don’t have much in it.”
“You could try the auction route. Might go higher at auction, or maybe not, but you’d have to wait for the next sale.  You should contact the auction house in Dallas.  They’ve sold some nice Texana.  See what they say.  I’d suggest an auction estimate of $4,000-6000.”
Douglas did just that, sending them information and pictures.  Their responses are worth quoting at some length.  Having been in the auction business myself I understand the challenges but this was a surprising fumble on their part.  The first reply:

“After reviewing the information you provided, we have determined that …. auctions is not the proper venue to sell your item.  Unfortunately, I can’t find any information about this book on the current market, nor at auction.  Without any kind of value information, I can’t recommend to my boss that we accept this book for consignment, as I don’t know if it would meet our minimum value requirement, as described below. . . .”

Douglas is irked by this lackadaisical response and emails again.  The second reply:

“After speaking with…. the director of our Texana department, and looking at the comparables you included, it is very likely that the value of the directory is significant. However, since the piece has no track record at auction, and considering the condition it is in at present, it would not be advisable to place an estimate like $4000-6000 on it. The torn portion of the map would have to be restored at no small cost in order to re-attach the portion still bound in the book, and the boards would have to be re-attached, as well. These facts will affect how bidders react to the book, once it is in a catalog and up for sale.
“Also, some of the comps that you cited, including the Dallas directories and the Dallas map [published much later], were estimated in the low hundreds of dollars, based on their own lack of auction history, and then did way over expectations at the auctions. The San Francisco directory was estimated at $1000-1500, then sold for just over $3000 [although Dorothy Sloan sold in 2005 the first San Francisco directory for $9750 on a 5000/10,000 estimate]. This is, of course, how we like to see items sell: estimate low (especially when you don’t have a track record) and sell high.
“Considering the rarity, we would of course be interested in selling the directory for you. But, also considering the condition of the item, we would want to keep the estimate as soft as possible, to encourage as much bidding as we can get. So, we would propose to estimate the directory at $1000-1500, and open the bidding at $500. If it sells, the only cost to you is a flat 20% of the hammer price. If you truly believe the directory is worth $4000-6000, this strategy will help us get there, by creating bidding interest at conservative levels, then allowing the real players to run it up, should the interest be there at the higher levels. The last thing you want to do is estimate it at $4000-6000, and then get no one interested at $2000 because they start thinking about the condition, the restoration that the book needs, etc. In fact, the worst thing you can do at an auction is to make one bidder second-guess a book for a single second.”