English bookman John Carter came into my life in early 1990 and has made frequent appearances since.  Our initial introduction was inevitable…  I was a novice book collector eager for guidance when I stumbled across a reprint of his classic guide ABC for Book Collectors, standing fine in jacket on the shelves of a retail bookstore.   I purchased the book for full price-- a rare occurrence then and now.  Today, I hold the book in hand and I see my scattered annotations from that first reading.   The foundation was set.
Before I discuss the origins and publication of ABC for Book Collectors a brief outline of its author is in order.  John Carter (1906-1976), educated at Eton and King’s College, Cambridge, became a bibliophile early on and found himself so keenly interested in the field he made a career of it.  He entered the rare book trade in 1927 with the London branch of Scribner’s New York.  The New York office would be in a few years overseen by notable American bookman, David Randall.  The two men formed a formidable duo.  Carter & Randall’s natural tastes ran to new paths in book collecting and bibliography.  They published, via Scribner’s, a number of innovative bookseller catalogues designed to promote untapped or nascent collecting areas such as Mysteries, Familiar Quotations, Modern First Editions, & Musical Firsts.  However, the rent must be paid and many classically expensive items were also sold with aplomb including a Gutenberg Bible.  Carter became managing director of the London office in 1945 and remained at Scribner’s until 1953. In 1956 Carter joined Sotheby’s auction house and was also a director of Parke-Bernet Galleries, New York.  His wide circle of associates lay at the heart of bookselling and book collecting of his era and included John Hayward, Graham Pollard, Michael Sadleir, and Percy Muir. 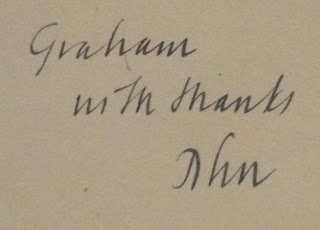 Another important copy in my collection is humorously inscribed to Sir Sydney Cockerell utilizing bibliographic abbreviations found in the ABC.  Cockerell (1867-1962) was an eminent bibliographer, collector, and Director of Cambridge’s Fitzwilliam Museum.  In an 1897 notice in the Athenaeum-- long before Carter was born--Cockerell and colleague F.S. Ellis were the first to question the authenticity of a number of Thomas J. Wise forgeries in print.  Both men served as the executors of the William Morris estate and several suspicious Morris reprints had come to their attention.  Cockerell would be directly involved with Carter over 50 years later in 1951 when Cockerell acted as an intermediary for the owners of a Gutenberg Bible.  The bible had been purchased in the eighteenth century by Sir George Shuckburgh and passed down through several generations of his family.  Cockerell delivered the book to Carter and Randall in New York.  They eventually sold the gem to Arthur Houghton, Jr. 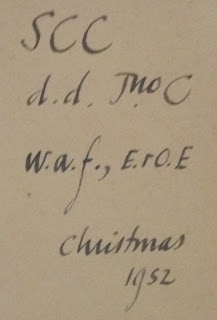 I also have a first American edition inscribed to Frederick B. Adams, Jr. “from his old friend the author, with considerable diffidence.”  Adams (1910-2001), collector, bookman, and eventual director of the Pierpont Morgan Library, became friends with Carter in the early 1930s while he was an editor of The Colophon: A Book Collectors’ Quarterly.  Many of Carter’s earliest essays appeared in its pages.  Shortly after the publication of ABC for Book Collectors Carter reached out to Adams for advice on taking a job at Sotheby’s. Carter would accept the Sotheby’s job and became the London consultant for the Morgan Library.  Adams would also sponsor Carter for membership in the Grolier Club.  Dickinson provides details in his Carter biography and writes, “Carter sent Adams hundreds of notes on books, manuscripts, drawings, and painting he felt might fit the library’s needs. . . The two men were close friends, shared many professional interests, and saw each other socially as well as at meetings of various bibliographic societies.” 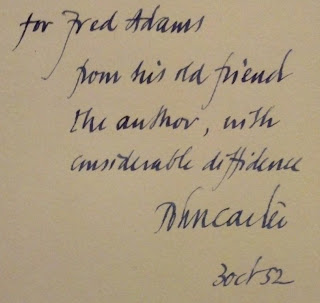 Carter until his death in 1976 oversaw five editions of the ABC for Book Collectors, each revised and updated as necessary, with the fifth edition being published in 1972.  After numerous reprints of the fifth edition a sixth edition appeared in 1980 edited by Nicolas Barker incorporating Carter’s last changes and his own revisions.  Barker, well-known bookman and editor of The Book Collector, was mentored by Carter.  Barker edited two further editions to keep them current: a seventh edition in 1995 and the eighth edition in 2006.  Bob Fleck of Oak Knoll Books, New Castle, Delaware, has published these last three editions.   He deserves kudos for recognizing the value of the work and keeping it in print for the last twenty years.   It remains a steady seller.
And yet I return to the 1952 first edition, the wellspring, for pleasurable reading on occasion.  It provides the closest link to Carter’s unexpectedly long-lived burst of biblio-creativity.  Whether my recent purchase be deemed CURIOUS, ESTEEMED, or perhaps, EXCESSIVELY rare, Carter spells out the nuances and foibles.  And if that purchase be an ASSOCIATION COPY, more the better!

Further reading:  The latest edition of Carter’s ABC and Donald Dickinson’s full-length biography John Carter: Taste and Technique of a Bookman (2004) can be procured, mint in jacket, from the publisher, Oak Knoll Books www.oakknoll.com