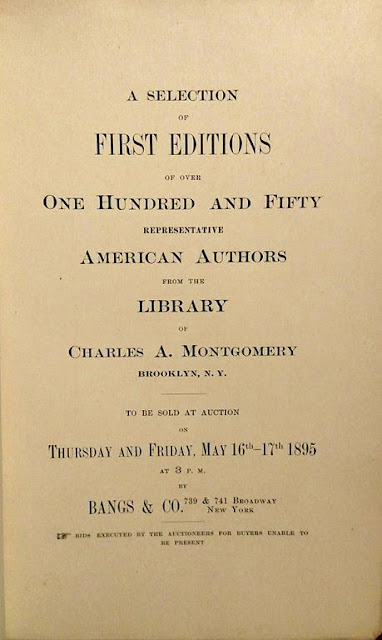 A SELECTION OF FIRST EDITIONS OF OVER ONE HUNDRED AND FIFTY REPRESENTATIVE AMERICAN AUTHORS FROM THE LIBRARY OF CHARLES A. MONTGOMERY, BROOKLYN, N.Y.  New York: Bangs & Co., May 16-17, 1895.  Introduction by Montgomery.  603 lots. Prices realized laid in.  8vo. Printed wrappers.

Charles Alexander Montgomery (1857-1933) of Brooklyn, New York, was one of the early collectors of American literature.  His strong focus on original condition was ahead of its time.  He compiled this auction catalogue himself providing more bibliographic detail than usually encountered and included extensive notes about the condition of the books and their contents.  The notable collector, Charles B. Foote (1837-1900), another pioneer of American literature collecting, seems to have been a role model and “rival” as Montgomery cited Foote’s copies often—Montgomery’s examples usually in better condition.
Montgomery was an impecunious collector. The expensive, already sought-after rarities by Poe and Hawthorne were not present in his library. Only a handful of the volumes reached more than five dollars at the auction.  A Whittier item Incidental Poems (1828) in original boards garnered the high price of the sale at $35 (lot 540).  However, his assemblage of secondary authors, periodical appearances and ephemera, showed true bibliographic acumen.  The Whittier description provides an example of Montgomery’s enthusiastic use of commentary.  He wrote, “This Volume was procured after a long search through New England; and is believed to be the only perfect copy offered for sale, anywhere, ‘in the past twenty-years!’ A well-known bookman, who has attended every sale of Libraries at Messrs. Libby’s Auction Rooms, in Boston, ‘since 1882,’ writes me that he has watched very carefully for a perfect copy since that date, and that he has advertised extensively for one, but without result!  I know of but one other perfect copy (or, which I suppose is perfect)—in the Harris Collection of American Poetry . . . “
Montgomery outlined his approach to the catalogue and his collecting philosophy in the introduction:  “To All Who Love Books:  In compiling this Catalogue of some of my books, I have endeavored, in the first place, to secure accuracy; but no one who has not attempted similar work can fully realize the truth of what Mr. Henry Stevens (‘of Vermont’) says in his ‘My English Library’: ‘If you are troubled with a price of accuracy, and would have it completely taken out of you, print a catalogue’”!
“In some respects—perhaps many—this Catalogue will be found both original and unique!  Every book has been measured by the standard scale of sizes adopted by the American Library Association—the result being a certain uniformity of description which is usually lacking; though in some cases the sizes seem rather arbitrary, and I have guided more by the height, than by the width of the books.  Another exceptional point---all titles have been given in full; unnecessary, but more satisfactory, on the whole—especially to the printer! . . .
“Every volume included in this Catalogue is, or is believed to be, a ‘First Edition,’ except where otherwise noted as being the First Revised Edition or the First Illustrated Edition; or an edition in which new and additional matter appears. . . when it is then become properly classed as a ‘First.’
“The bindings, where not otherwise specified, are those in which the volumes were originally bound; very few have been rebound—and none of them by me.  While tastes differ, and each individual has a right to preserve in the original, or replace in a new binding, the volumes he possesses, yet I hope those into whose hands these and other ‘first editions’ come, will, if they desire uniformity on their shelves, or a more credible appearance than some of ‘th’ embattled volumes’ present, have cloth cases made for them, rather than mutilate them by rebinding!. . . I do not want my rare Shakespeare Folio, of 1623 (when I get it) dressed in the finest binding of to-day!  My Greek vases will not be ‘ornamented’ by ‘The Decorative Sisters’ (if I can help it!); nor my ancient coins ‘gilded o’er’!  And it seems to me that the same principle applies to ‘First Editions,” whether of Shakespeare or of Stoddard!  And so I appeal ‘to all those who love books’ to have cloth cases made for their rare ‘first editions’; and not to mutilate them by rebinding.”
Montgomery then signs off, “Yours Bibliographically—and for Vegetarianism.”

That certainly was a surprise ending.  His blend of bibliography and vegetarianism deserved a closer look.  Who was this pioneering book collector who was also a trailblazing vegetarian?
Biographical information about Montgomery is scant online: only a few threads here and there to weave a story.  Born in Brooklyn in 1857, Montgomery died in Brooklyn in 1933, apparently a life-long resident.  He had an advertising agency in New York City and was a publisher of sorts operating as C. A. Montgomery & Co.  The October 1, 1887 issue of Literary World noted, “C. A. Montgomery & Co., a young New York firm, are to make house and home books their specialty, and will shortly be ready with a number of tasteful and helpful little manuals instructive in the joint arts of house-keeping and home-making.”
A few examples of his publications include the following.  All are scarce to rare now:  Goodholme’s Domestic Cyclopaedia of Practical Information (1885), Perfect Bread: Its Preparation and Use (1886), and The New York Cake Book: Fifty Recipes by a famous New York Chef. (1904).
Adolph Growoll, publisher of Publisher’s Weekly and indefatigable recorder of book trade history, wrote in Book-Trade Bibliography in the United States in the XIXth Century (1898) that Montgomery was a member of the Dibdin Club and that he owned one of three known copies of the earliest book-trade catalogue issued in the United States (Boston: 1804).  Montgomery’s copy was reproduced in Growoll’s book.
Growoll also mentioned Montgomery in American Book Clubs (1898) and noted that the Dibdin Club was “formed in New York, in May, 1897, by half a dozen persons interested in publishing bibliographical material for which a publisher might not readily be found.”
Two other auctions of Montgomery’s books are recorded by McKay in American Book Auction Catalogues, 1713-1934 :  May 11, 1896 (4528) and May 22, 1907 (6335).  This last auction, Some Bibliography. Including the Most Complete and Perfect Catalogue of American Publications, 1774-1900. . . (344 lots) was also catalogued by Montgomery and showed his deep interest in book trade and bibliographic history.  Montgomery’s copy of the 1804 book trade catalogue was sold in this sale for $50.
Montgomery’s enthusiasm for vegetarianism was reflected in his position in 1895 as treasurer of The New York Vegetarian Society and later in 1902 as secretary of the Society.  Montgomery’s avocation is glimpsed throughout 1902 in various references.  A December 3, 1902, New York Times article with the wistful headline, “To Annex Mars and Make Meals on Air,” quoted Montgomery, “Vegetarianism meant temperance, anti-vaccination, anti-vivisection, cremation, anti-war and universal peace.”  This certainly covers a lot of ground and firmly classifies Montgomery as a free-thinker of sorts.
According to The Vegetarian Magazine, Vol. 6, Issue 9 (1902), “The largest meeting at which vegetarianism has been brought forward recently was one held in the Grand Opera House, New York, on Sunday evening, June 1.  There were about 3,000 people present.  Charles A. Montgomery, Secretary of the New York Vegetarian Society, delivered an address on ‘Superiority of Vegetarian Diet for Developing Strength and Endurance.’”
The proactive Montgomery was certainly not shy about mixing his vegetables and books.  Growoll recorded  in The Bookseller’s League: A History of Its Formation and Ten Years of Its Work  (1905), “On the evening of May 8 [1902], the Entertainment Committee, at the suggestion of Mr. Charles A. Montgomery, secretary of the Vegetarian Society, provided for the League a strictly vegetarian dinner.  About fifty members were present to entertain their special guests, Ernest H. Crosby, president of the Vegetarian Society of New York, an enthusiastic vegetarian, and James Clarence Harvey.”
“The menu was printed in green ink on vegetable-colored sheet of blotting paper.  It was as follows:

“Mr. Crosby made a happy speech on ‘Why Bookmen Should be Vegetarians.’  He claimed that all domestic animals were more or less unhealthy, and must breed disease in those who consumed them.”
After 1907, I can find little reference to Mr. Montgomery and wonder how he occupied the last twenty-five years of his life.  I’ll bring this brief glimpse to a close, fascinated but unmoved by his bookish vegetarianism.   It is time to head outside and smoke a prime cut of brisket in my pit.
Posted by Kurt Zimmerman at 8:16 PM