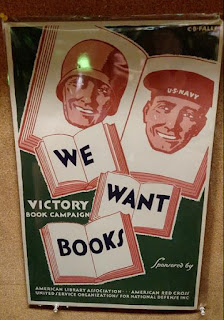 Meetings are often necessary evils but this one I am eager to attend.   I sit at an expansive table with Bill Allison, my friend and co-founder of the Book Hunters Club of Houston in, appropriately, the Founder’s Room at the Grolier Club, New York City.   The room is well-paneled and solidly-booked with shelves of bibliographic publications.  Certainly the ghosts of great bookmen of the past are in attendance as well.  We are seated with approximately fifteen trustees of the Fellowship of American Bibliophilic Societies (FABS).  It is their annual meeting and our club is being officially accepted into the organization.  Bookish congeniality fills the air and also curiosity at the two Texans who have saddled up for the ride.  Being newbies, Bill and I remain fairly quiet as the meeting progresses.  Incoming FABS president, Michael Thompson of Boreas Fine Art in Evanston, Illinois, sits to my right.  Much to my surprise, he suggests a FABS trip to Texas for 2017.  (One of the primary FABS benefits being an annual book trip to a host city.)  This is not a spur of the moment idea but something he’s been thinking about long before the meeting.  “We’ve never taken a trip to Texas before,” he says.
I casually suggest that I could provide input for such a trip and would be glad to help, as in assist, informally.  Murmurs of delight echo in the chamber.  Information comes fast and heavy after that—planning, past trips, etc.  By the time the meeting is over, I appear to be a co-chair of the venture:  new guy with apparent enthusiasm thrown into the fire.  It will be fun, I say to myself and Bill.
There are hearty welcomes from all around as we leave the room.  A particular moment is the serendipitous meeting of Richard Ring, Head Curator and Librarian at the Watkinson Library in Hartford, CT, who has a common interest in book collecting history.   He’s just published a book of newspaper columns by Lawrence C Wroth, famed John Carter Brown Librarian.  I mention that I have a large collection of Wroth association items.  There is momentary disbelief-- then I’m a life member of his Wroth fan club.
The day is already intense before the FABS meeting.  As a prelude, Bill and I make our way to Sotheby’s to have lunch with Richard Austin, director of the Sotheby’s book department.  Richard and I go back to our college days at the University of Texas.   I hired him to work with me at Butterfield and Butterfield auction house in San Francisco.  He’s done well indeed from there.  A few items on display for his upcoming auction are a 13th amendment on vellum signed by Lincoln and most of the legislators involved, the authorized broadside of the Emancipation Proclamation printed in forty-eight copies, signed by Lincoln, an English issue of the first edition of Whitman’s Leaves of Grass, and other similar delicacies.  The book department is moving locations within the building so things are more chaotic than usual but Richard gives us a tour, introduces us to his cataloguers, and shows us a few consignments that are in process.  He also mentions that they have thinned the reference collection during the move and tells me of a young bookseller who now has the material.  We will meet him later in the story.  The lunch at a local Irish pub is filled with book talk and an appropriate black and tan beer. 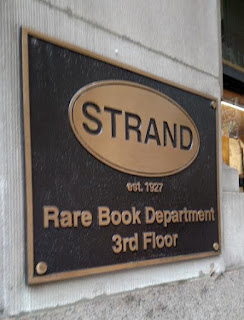 Before we attend the ABAA Fair let me indulge a recollection of our visit the previous day to the Strand bookstore.  Bill and I have barely disembarked from our plane and we find ourselves browsing the rare book room of the Strand.  The Strand is the largest general used bookstore left in Manhattan.  Their rare book department on the third floor is accessed by a separate entrance at street level.  We take the elevator and soon the scent of leather hangs in the air.  The alcove close to the rare book department entrance houses a large section of books about books.  I attack it with gusto, balanced precariously on a small step ladder to reach the uppermost shelves.  The hunt for association items requires much opening and closing of books so a haze of dust soon surrounds me, some of the books at full arm’s reach not being handled in quite some time.  A few gems are gathered, most notably The Houghton Library 1942-1967: A Selection of Books and Manuscripts in Harvard Collections (1967) inscribed from Philip Hofer of Harvard to John W Crawford, Jr. both preeminent collectors and curators.  In all, a stack of fifteen or so books is ready for purchase.  Bill is off poking around in other areas and finds for my Latin American collection a copy of Jorge Luis Borges’ El Congresso (1971).  It is not a particularly rare item but I don’t have it and the price at $30 is irresistible. 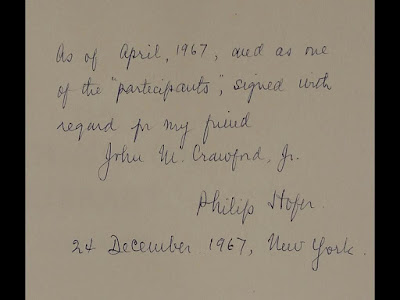 As an aside, there is the usual grumbling at the fairs by various bookmen that the Strand isn’t what is used to be, that you can’t find the books one did in the old days, etc.  I’ve heard this kind of thing for over twenty-five years.  A reflective nostalgia seems endemic to book collecting but there are still books to be found.
We are now on our way to the Armory at 643 Park Avenue for the first evening of the ABAA Book Fair.  The Armory is an odd, beautiful building.  Dating to the late 19th century it is cavernous.  You enter through massive wooden doors into an expansive, darkened foyer, so dark that it takes a moment for one’s eyes to adjust.  We are surrounded by cathedral-like ceilings, huge chandeliers, and vaguely visible, life-size oil paintings of forgotten luminaries.   We find the coat check and fumble for our fair tickets.  The crowd at the entry is well-dressed and focused as they file in, two security men stand as gatekeepers monitoring the swirl.   Tables stacked with book fair guides and dozens of free catalogues from participating dealers line the entry and an American Antiquarian Society table offers book bags with the fair logo.   The darkness of the Armory foyer opens into a disconcerting bright light.  Behold, the soaring exhibition space becomes clear and before you are two hundred or so of the best antiquarian booksellers in the world, their booths filled with top shelf stuff, a veritable menagerie of delights available for purchase, a collector only restrained by the size and liquidity of the book budget.


Frankly, I don’t expect to find much at this mighty fair.  My areas of focus—biblio-material and Latin American literature—do not usually garner the prices needed to cover the $9,000 plus cost of the booths.  Many of these dealers do have things of interest to me; they just don’t bring them to this particular show.  So the networking and camaraderie are the primary rewards.  That being said, I still look with a book hunter’s eye and spot a few possibilities.  I even find an ephemeral Mark Twain item for my friend Kevin Mac Donnell’s unrivaled collection—and finding something he doesn’t have is quite an achievement.  This was done by cell phone photo, a quick email, and a bet how long it would take him to respond.  I guess twenty minutes and he gets back to me within fifteen with the response, “Buy it!”
Bill Allison sees a few Western Americana items but they are priced at full retail so there is no room for him as a dealer to buy for resale.  We prioritize a visit to the booths of Peter Stern of Peter L. Stern & Co. and Bryan Bilby of Appledore Books.  They both were kind enough to supply a free fair pass ($50 value).  Peter’s booth is filled not only with his typical assortment of literary highlights but also his boss (wife) and his usual wit and good humor.  I’ve known Bryan since his bookselling days in San Francisco.  He was a frequent buyer at Butterfield & Butterfield auction house where I was director of the rare book department.  Bryan is offering an eclectic assortment of goodies ranging from literature to architecture and photography.  Bryan and I reminisce together briefly as I browse the booth but this is time for him to make hay so we move on.
The rest of our time at the ABAA fair is spread out over Friday and part of Saturday.  There is a steady crowd and a lot of energy, and I ride the wave of it which temporarily relieves my aching legs and feet.   Highlights include a fine conversation with Bill Reese about his latest catalogue for the fair Americana – Beginnings: Cortes to Lewis and Clark 1524-1814 playing off the Thomas Streeter essay of the same name.  It’s a stunning array of rare early Americana that resembles a 19thcentury Henry Stevens catalogue rather than the stock of a 21st century bookseller.  The cover item listed at $750,000 is a unique seventh edition of the Bay Psalm book published in 1693.  The book had originally surfaced in the early 1970s at Goodspeed’s according to Reese.  Whereabouts were unknown until recently when the private owner decided that money for college tuition was a higher priority than an Americana high spot.  I check in later with Bill and he says about a third of the catalogue has already sold including the Bay Psalm item.  My souvenir from him—an inscribed copy of the catalogue for my Reese collection. 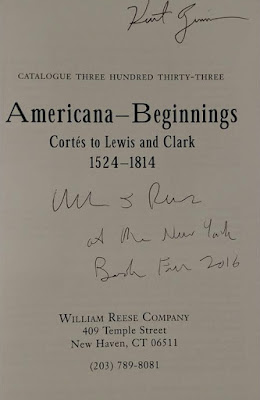 I also spend time with dealer Lloyd Currey, certainly the world’s expert in science fiction material for over forty years.  We speak of a mutual friend, Willie Siros, a former cataloguer at the Ransom Center at the University of Texas, who collected science fiction and mysteries on an impecunious budget, but with a knowledge rivaled by few others.  Neither of us had seen the rather reclusive Mr. Siros in many years. I wonder if Siros, an early book mentor while I was in college, still has over ten thousand fully catalogued volumes of his collection that I browsed in amazement during my formative years.  Lloyd admits a fondness for biblio-association copies in his subject area and has a shelf of reference books formerly owned by E. F. Bleiler and the like.
John Crichton of Brick Row Bookshop in San Francisco is kind enough to inscribe a copy of Franklin Gilliam: Texas Bookman (2014) edited by him.  This remembrance of his predecessor was twenty years in the making with contributions by fellow bookmen, many now long gone, including F. Warren Roberts, Anthony Rota, Larry McMurtry, Richard Landon, David Farmer, Peter B. Howard, Andrew Hoyem, and Crichton himself. 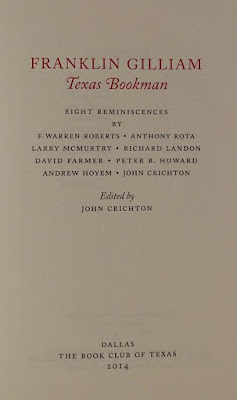 Here are few more association finds from my NYC haul: