Six Score and More: Wallowing in It with Bill Reese


I've been recently wallowing in rare books with noted bookseller Bill Reese.  Not literally, but via the Rare Book School podcast of his June 15, 2016 talk, “Starting Out: My Early Days as a Rare Book Dealer,”  Bill’s entertaining account of his biblio-youth in the 1970s that focuses primarily on Yale and Texas, two seemingly disparate paths connected by his early interest in Western Americana.  Reese discusses a brilliant sky of prominent bookmen and women who influenced him.  He ends with an observation about his pre-digital experiences garnered at the Yale libraries and via the rare book trade:
“In the pre-digital age . . .  one could really only learn and obtain knowledge of material by being absorbed in it and soaking in it.  I had the great good fortune to have the ability to wallow in vast amounts of material and be able to soak in a huge amount of knowledge through it.  . . . One of the things that has obscured the digital age is the difference between knowledge and information.    Information is now readily available all the time in every form, we think we can look it all up, and to a degree we can look things up in ways we never could before, but being able to look things up without the knowledge, and the knowledge that only can be obtained by literally wallowing in the material is I think the difference between true deep book knowledge and simply accessed information.”
I’m familiar with this pre-digital wallowing.  I had the opportunity in my college days in the late 1980s to have three years free-reign of the stacks of the Ransom Center at the University of Texas (and other libraries on campus) during an internship.  I combined this with frequent visits to bookshops in Austin and San Antonio and all served as a marinade of biblio-learning that no amount of internet surfing can replace.  Wallowing is still available by the way—libraries are still filled with books, bookstores are still out there, rare book classes and schools are flourishing, and most dealers are more than happy to share their experiences.  One just needs to make a concerted effort to dive in.
Reese’s talk is delivered to me digitally but it feels like an old-school radio show with no video or a printed transcript as a crutch.  I pause the recording for a moment to crack open a Live Oak Hefeweisen, settle back on the couch sipping my brew, pet the fat cat sprawled next to me, and close my eyes to listen.  About twenty minutes into his lecture Reese discusses his four primary mentors at Yale: Archibald Hanna, Charles Montgomery, Donald Gallup, and Fritz Liebert.  All but Montgomery are familiar to me as prominent bookmen.  As Reese talks about Montgomery a flicker of recognition ignites in my mind but it is a slow burn.  My eyes are open now and I listen intently.
Montgomery (1910-1978) was an “extraordinary character” says Reese.  He began as a dealer in decorative arts and antiques and was hired as a curator in 1949 by Henry Francis DuPont to develop the Winterthur Museum and Library in Delaware.  In 1954, Montgomery became director of Winterthur.  After retiring, he came to Yale in 1970 to teach.  Reese took a class from him and soon learned that Montgomery, like Archibald Hanna, “knew everybody and had been everywhere.”   Montgomery was “absolutely fearless in taking his classes out to see things.”
Reese recounts an example when “he took a group of us to the Frick Museum. . .  there was this amazing Boulle table that even in those days was probably worth a couple million dollars. . .  Charlie was very insistent that everybody understand the woods involved and things like that.  So, we’re standing in the Frick’s drawing room . . . and Charlie turns to me and another and says, ‘Bill, Joe, turn that table over’ . . . before the director could say anything we picked the table up and turned it over and I look up and the director of the Frick is standing there with his jaw hung open but it was too late to do anything about it so we got away with it.  That’s the way Charlie was, you went in, you wanted to see something, you picked it up and looked at it.  That was a great lesson, too.  That gall could get you a long way,” Reese says finishing his recollection with a laugh.  Charlie’s “brashness” and knowledge made quite an impact on the young Reese.
The flicker of recognition becomes a bonfire and I pause the recording.
“Son of a biscuit,” I say loudly to the cat that is startled awake.  I can still move fairly quickly when motivated and motivated I am.    I’m up from the couch and heading full tilt for the bookshelves in the master bedroom.  There is no exact order to my books but I know the general area to search.  I can’t find it right off, damn it –take a deep breath--and then success:  the tall, thin tome is top shelf left, and I soon cradle it in my hands like a newly discovered relic.   The book is Reese’s precocious Six Score: the 120 Best Books on the Range Cattle Industry (Austin: 1976).  I bought the book on Ebay in 2010 from a dealer in New Hampshire.  The copy was inscribed and the price modest and that was enough.
The inscription reads: “For Charles Montgomery, My first book—far afield from decorative arts, but another side of Texas from Miss Ima Hogg.  Best, Bill Reese, July 27, 1976.” 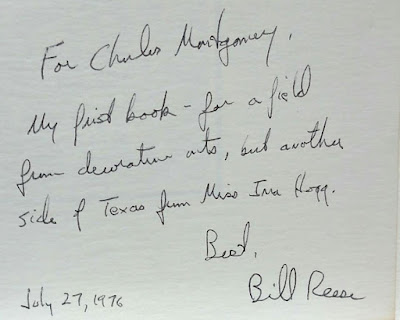 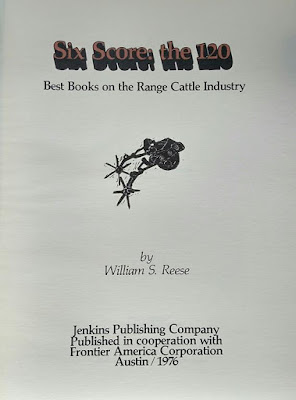 My original catalogue slip is in the book.  I’d dutifully researched the information then available on the web to identify Charles Montgomery and sketched out a biography.  I explained briefly Reese’s reference to Ima Hogg, Texas philanthropist, patron, and collector of the arts, but I certainly didn’t realize the full importance of the association—until now.
I immediately phone Douglas Adams, my friend who tipped me off to the Reese podcast, “I just found an awesome association copy,” I say excitedly.
“What did you buy?”
“Nada.  It is already in my collection,” and I tell him the story in full.
I gently place the book on the shelf and linger a moment admiring it from a fresh perspective.  Now is time for a catalogue revision and a surprise email to Bill Reese.
I’m wallowing in it, indeed.

Bill Reese read the essay and was kind enough to reply:
"A few further notes on your copy of SIX SCORE. I finished writing the book in late 1975 and gave it to Jenkins, who got it out in a boxed set with Ramon Adams' book in July, 1976. I spent that June and July cataloging books in Texas, including a lot of time at the Jenkins company going through Eberstadt books. I had the first copies with me when I came through New Haven briefly in the last week of July to organize my apartment for the next year. Charles Montgomery's wife Florence and I shared a birthday-July 29- and several years had a birthday dinner together. We did it early in 1976 because I was turning 21 that July 29 and was having dinner with my family, then going to Europe for the rest of the summer the next day. So I had dinner with the Montgomery's a few days early, on the 27th, which is when I gave Charlie the book.

As I suggested in my talk, Charlie was a great inspiration to me, and he and his wife became good friends as well as mentors. Sadly he died in the fall of 1978, of a heart attack.   All best,   Bill"

Reese's Lecture Can Be Found Here Under the June 15 Entry.

Posted by Kurt Zimmerman at 4:22 PM