De Ricci and Bartlett’s 1921 Book Collector’s Guide: An Icon of the Golden Age 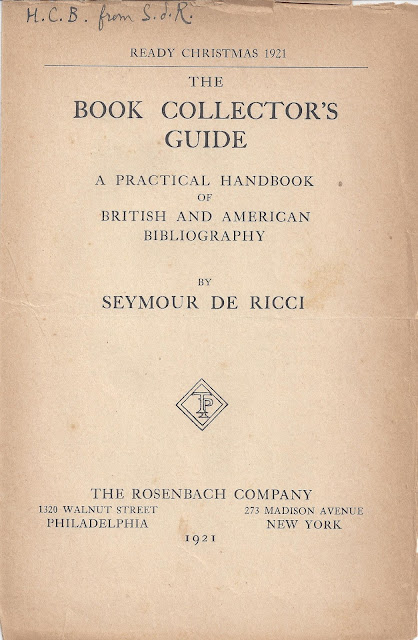 Seymour De Ricci’s and Henrietta Bartlett’s The Book Collector’s Guide: A Practical Handbook of British and American Bibliography (1921) is much more than a forgotten price guide.   The timing of publication and bibliographic expertise provide an insider’s view of the Golden Age of American book collecting--then arguably at its peak--when opportunities were abundant and mighty collectors rose to the occasion.  It was a transitory age, too, and reflects in retrospect the coming shift from old paths to new paths in collecting that would take hold in the 1930s.  The story of the book’s birth is also quite a tale with the polymath bookman Seymour de Ricci at the helm and Henrietta Bartlett as his brilliant, but generally unrecognized co-author.

Various association copies of the work gathered in my own collecting lend a tactile reality to the influence and interchange among the bookmen and women involved.   And without these books my essay would never have come to fruition.

Here is a link to a scanned copy of the book. Incidentally, one of the 100 on Japan paper, this example inscribed by Clark.  The Book Collector's Guide

An example of De Ricci's provenance prowess are these scanned cards "made for the compilation of his unfinished Bibliotheca Britannica Manuscripta. This project was intended as a companion work to his Census of Medieval and Renaissance Manuscripts in the United States and Canada, published between 1935 and 1940. De Ricci's notes, compiled in thirty-four boxes containing over 60,000 index cards and originally bequeathed to the Institute for Historical Research in London, are currently housed in the Senate House Library at the University of London."  Scanned Cards with De Ricci's notes

The Guide to Henrietta Bartlett's Papers at Yale is worth perusing.  Bartlett Papers
Posted by Kurt Zimmerman at 7:02 PM