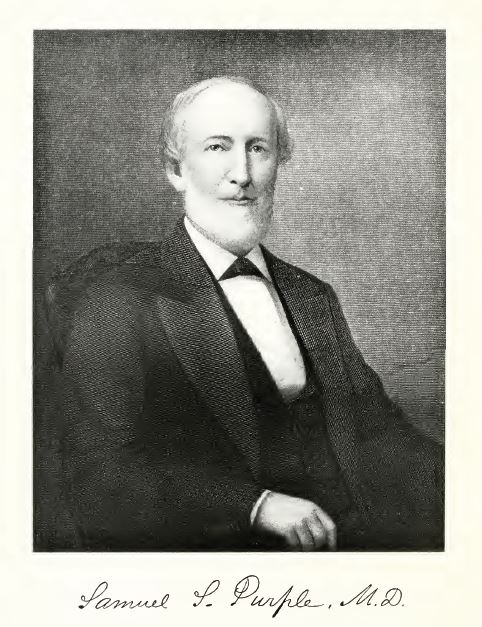 Dr. Purple has made a house call and intends to stay awhile.  It is my house specifically, third shelf to my right, the newest delivery to the library.  Dr. Samuel S. Purple (1822-1900) did not author the work that just arrived, he owned it.  The book is a tribute to his friend and legendary Americana collector, Henry C. Murphy (1810-1882).  Once finely bound in half morocco and marbled boards with an elaborate, gilt spine, the book’s binding has been battered and rubbed over its long journey, apparently un-appreciated by some previous handlers, but protecting the contents within.   There is the faint scent of cigar smoke.  I plucked it from the flotsam and jetsam for pennies, restoring the appreciation if not the binding.


The Murphy focus initially caught my attention.  I had no idea who Dr. Purple was but his amusing name, reminiscent of a knock-off soft drink, also intrigued me.   This sammelband, assembled by Purple and bound to his order, contains three items:  The first is an autograph letter dated May 16, 1871 from Murphy to Purple, a copy of Murphy’s privately printed A Catalogue of an American Library, Chronologically Arranged (ca. 1850), and a description of Murphy’s library removed from a copy of Dr. James Wynne’s Private Libraries of New York (1860).  Two portraits of Murphy of are included for visual appeal. 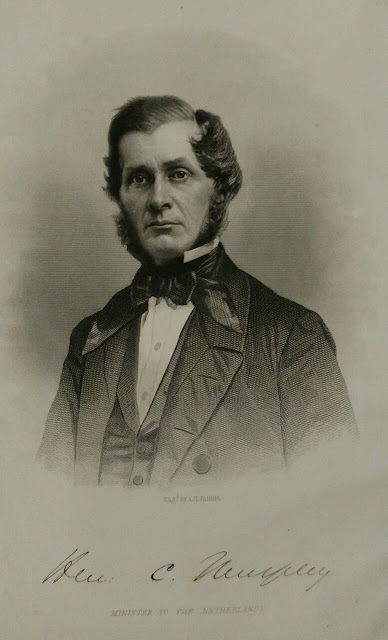 A Catalogue of an American Library is what first fired my dopamine receptors.   It is muy raro printed in an edition of only twenty-five copies according to bibliographer Wilberforce Eames although no limitation is found within the catalogue itself.  Murphy, then about age forty, had it printed for private use and distributed copies to friends.  I’m fortunate to own another example, inscribed to fellow collector, J. Carson Brevoort.  It is the only other copy I’ve seen in the wilds.  The catalogue records 589 items of Americana in Murphy’s library, many rare and important.  The catalogue concludes with the statement, “End of First Part” but a second part never appeared. 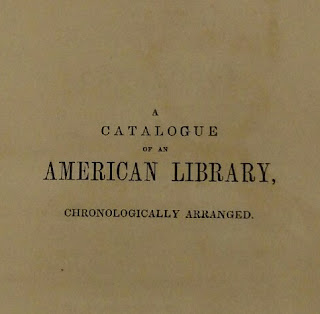 Murphy was a busy man and probably didn’t have time to issue a supplement.  Don Dickinson writes in Dictionary of American Book Collectors, “As a lawyer, then as a politician in Brooklyn city government Murphy was eminently successful in the early part of the nineteenth century.  His appointment as city attorney was a stepping-stone to his election as mayor at the age of thirty-two.  Subsequent opportunities placed him in the New York state legislature and later in The Hague as the United States’ chief diplomatic minister to the Netherlands.  Throughout his distinguished career he wrote articles and texts that focused on his scholarly interest in the Dutch settlement of the New World.  In order to carry on the research that his writing required, he built an extensive scholarly library.  The most important part of that library reflected his deep interest in the period of exploration and in those men who were first to record their impressions.  Among those texts were the ‘Jesuit Relations’ and the great works of DeBry, Hakluyt, Hudson, and Champlain, to name only a few.  As a complement to the texts on early discovery, Murphy had twenty-six early editions of Ptolemy’s Cosmographia ranging in date from 1462 to 1600.  In another section of the library Murphy gathered a large number of books and tracts on American Indian languages, customs, and beliefs. . . His library held excellent documentation on the settlement of New England and the southern states, with particularly strong holdings of early statutes and constitutional conventions, proceedings of historical societies, journals and newspapers.  Books from the presses of William Bradford, Peter Zenger, and Benjamin Franklin were prominent in many of these holdings. . . Murphy was a knowledgeable bibliophile, an energetic collector, and a competent historian.  His library was one of the outstanding collections assembled in the late nineteenth century.”


The utilizing of thermal springs for health reasons has a long history. (One of the books lent by Purple may have been John Bell’s Mineral and Thermal Springs of the United States and Canada [1855].)  The circumstances of the letter are unknown, but a little imaginative conjecture places these two ardent bibliophiles in Joseph Sabin’s bookshop, Murphy perhaps bending deep to examine those bottom shelves, Purple a few steps over straining skyward to reach a tome on the top shelf, Sabin in the background, knowing it is going to be a good day.  Murphy suddenly lets out a groan as he tweaks his touchy back wrestling with a large folio.  Purple feels a twinge in his shoulder on an overreach.  The two men take a breather together, discussing with Sabin the issue points on various Americana rarities and eventually the aches and pains of a certain age. Purple is a bit awed by the mildly older Murphy, this former mayor of Brooklyn, Congressman, and generally famous collector.  He offers to supply a couple of books that might just help Murphy rejuvenate what ails him.  The thank you note becomes a memento, along with the rare catalogue and the dissected extract on Murphy from Wynne’s book, all bound so finely together, nestled amidst Purple’s other prizes as a token of biblio-friendship until Purple is no more.  But the book itself continues on, alternatively prized, forgotten, and now resurrected, the sinuous connections of bibliophiles remaining unbroken. 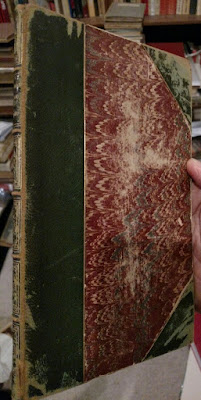