Relatively few American antiquarian bookseller memoirs relating to the 19th-century trade exist.  I recently acquired a holograph manuscript from Christine & Bob Liska of the Colophon Bookshop.  Written by New York bookseller Isaac Mendoza (1864-1937) it is a brief but entertaining autobiographical fragment entitled “Booksellers of the Early [Eighteen] Eighties.”  The work does not appear to have been published—until now.  My transcription of the text with a few pertinent notes can be found below.


Donald Dickinson’s entry for Mendoza in Dictionary of American Antiquarian Booksellers is the best short synopsis of Mendoza’s background and importance.  He writes:  "At the age of eighteen [1883] Mendoza started working as a clerk for Michael J. Hynes, who owned two bookstores in New York, one a large outlet on Broadway and the other a small basement shop on Ann Street.  The young man must have made a good impression since after only three months he found himself in charge of the Ann Street location.  When Hynes died in 1887, Mendoza took a job as the cataloger for the bookselling firm of Bowers & Loy on Nassau Street.  After twelve years of varied experience working for others, Mendoza decided to go into business for himself.  On 1 November 1894 he opened a shop at 17 Ann Street in the heart of New York’s book district.
“Opening under the name Old Ann Street Book Store, Mendoza and his three sons built a huge stock and attracted a steady flow of business.  Mendoza was particularly aggressive in buying private libraries and the contents of other bookstores.  At one point he bought the entire backlist stock of the Stone and Kimball publishing firm.
“Mendoza numbered among his distinguished customers many bankers, city government officials and business executives.  In 1904 he sold two libraries en bloc to Henry E. Huntington—the Charles A. Morrogh library of first editions and illustrated classics and the John A. Morschhauser library, made up of English and American literature and fine bindings.  Huntington continued to buy from the Old Ann Street Book Store up through the early 1920s.  Other regular customers included Mr. and Mrs. William Rose Benet, Amy Loveman and Mr. and Mrs. Christopher Morley.  It was said that once you entered the six-floor, gas lit shop, it was almost impossible to leave without making a purchase from the estimated half-million volumes.
“Mendoza’s three sons, Aaron, Mark and David, ran the business for thirty-five years after their father died.  When David died in 1972, Walter Caron bought the stock along with the right to continue to use the family name.  Although he changed the emphasis from antiquarian books to mysteries and science fiction, the atmosphere remained the same.  With its windows set back from the sidewalk on one of the city’s oldest and narrowest streets, its floor-to-ceiling shelving and tables of books everywhere, the Mendoza store was for many New Yorkers the essence of what a bookshop should be.”
Other information about Mendoza is found in Madeleine Stern’s Antiquarian Bookselling in the United States (1985) and Marvin Mondlin and Roy Meador’s Book Row: An Anecdotal and Pictorial History of the Antiquarian Book Trade (2004).
I have in my collection an association copy of Goodspeed’s Yankee Bookseller: Being the Reminiscences of Charles E. Goodspeed (1937).  It is inscribed, “Mr. Isaac Mendoza, with compliments of Charles E. Goodspeed, Oct. 16, 1937.”  (Particularly poignant as Mendoza would pass away two weeks later on November 3rd.) 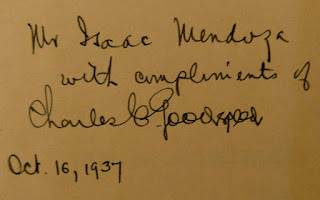 Mendoza played a key role in Goodspeed choosing bookselling as a career.  Without Mendoza’s early encouragement and advice Goodspeed may have never established his famous Boston bookshop. Goodspeed writes, “I found myself without a job in the fall of 1898 [because of the 1893 Depression and aftermath].  The silver lining in that cloud was the opportunity of fulfilling a long cherished desire.  Now, I said, I can do what I always wished to do; I can try bookselling.  The love of books had become a passion with me. . . So, when a change of business was forced upon me, I went to Isaac Mendoza, who still occupies the store at No. 15 which I most frequented at the time, and said, ‘Mr. Mendoza, I have lost my position here in New York.  I am going back to Boston and in these times there are no new jobs to get.  I am planning to go into the secondhand book business.  What do you think of my chances?’

“I got my first encouragement from his reply, ‘I never knew but one man who failed in it; that was Tom ---, and he drank rum and played the races.’  Stimulated by this assurance I invested my savings of a few hundred dollars in miscellaneous purchases at Bang’s Auction Rooms and some ‘remainders’ which I bought from Mendoza.  The latter included a lot of books from the bankrupt stock of Stone and Kimball, of which Mendoza had been a large buyer.”
The following transcription of the manuscript is basically verbatim, leaving in the occasional idiosyncratic grammar for flavor, only lightly edited when it is distracting.  I’ve added a few clarifying notes in brackets and given a brief commentary at the end. 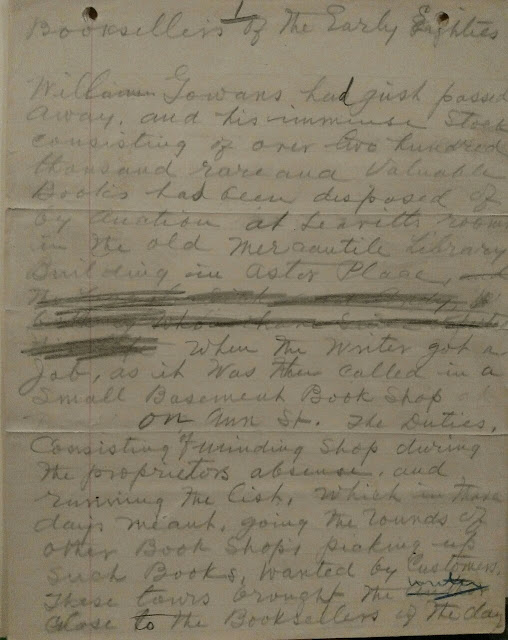 “Booksellers of the Early [Eighteen] Eighties”

Notes:
William Loring Andrews’ Old Booksellers of New York (1895) is a complementary work that mentions a number of booksellers referred to by Mendoza.  The primary focus of Andrews is William Gowans.

The importance of Charles L. Woodward is under-appreciated.  He was a primary player in the trade and a number of bookman such as Wilberforce Eames apprenticed with him.    Even the redoubtable Donald Dickinson overlooked Woodward and he has no entry in Dictionary of American Antiquarian Bookdealers.

C. N. Caspar’s Directory of the Antiquarian Booksellers and Dealers in Second-Hand Books of the United States (1885) has entries for the following:  (scan of Caspar available online).

Michael Burd of Kennebunkport, Maine was kind enough to bring to my attention the following 1990 newspaper article about the end of the Mendoza Bookstore:


About New York; As Dust Gathers, Oldest Bookstore Reaches the End
By DOUGLAS MARTIN
Published: February 3, 1990
NYT
The other day, somebody stole the big sign. It weighed better than 50 pounds and each morning had to be carted down to the street. It would be placed in front of piles of worthless old books to announce that on the second and third floors of the rickety six-story building at 15 Ann Street existed the Isaac Mendoza Book Company, New York City's oldest bookstore.
The sign was really no longer needed. On Feb. 28, the owner, Walter Caron, will forever close the doors of a shop that opened in 1894.
In the measure of things, the loss is small. The same books will still be sold elsewhere. And customers had already dwindled, with sales in recent months dropping to half the level of a year ago. There was no Christmas spurt. In December, for the first time, Mr. Caron, who is 70 years old, had to withdraw money from his savings account to pay the rent.
''I'm not being forced out,'' he said. ''I just feel that New York is getting terribly difficult.''
So the musty, dusty smell of Mendoza - its hopelessly jumbled mountains of aging tomes, its paint-splattered stepladders, its yellowing portraits of Herodotus and Kipling - will retreat to the corners of selected memories.
While the legend was apparently never true that the store sold a Gutenberg Bible to J. P. Morgan, the time will come when no one will be the wiser. And perhaps it will be correctly remembered that the likes of Buckminster Fuller and Christopher Morley browsed here.
One can hope. This is what Morley said of bookstores: ''Lord, when you sell a man a book, you don't sell him 12 ounces of paper and ink and glue - you sell him a whole new life.''
Mr. Caron will be glad to show you a yellowing photograph of Isaac Mendoza, but he never met him.
Isaac's legacy to the shop is a reputation for securing unusual books. Ownership passed to his three sons - Mark, the gentleman; Aaron, the scholar, and David, the wit.
It was David, the youngest, and his wife, Gilda, who were Mr. Caron's friends.
At age 20, he had descended on New York from Springfield, Mass., bent on realizing his dream of being a great ballet dancer. And indeed he danced a small part or two with the American Ballet Theater.
But that didn't pay the bills, and Mr. Caron found his way to Whyte's, a now defunct restaurant across the street from Mendoza. Everything at Whyte's was homemade, from breads to ice cream. The chefs were always European. Mr. Caron started as a busboy and worked his way up to head waiter.
But he found himself spending ever greater amounts of his time across the street helping out David and Gilda. He also began to collect books on his own. Concerned that people were rifling the 40 cases of books he kept in the basement of his York Avenue apartment building, Mr. Caron in 1960 rented a loft on Chambers Street for $65 a month.
''You start out by collecting, and the next thing you know you have so many books you don't know what to do,'' he said.
After David Mendoza died, it was thus only natural that Mr. Caron bought the store from Gilda in 1972.
So Mr. Caron in these last days stands behind a cluttered counter, often doing crossword puzzles or reading a mystery. He is glad to talk.
He tells the story of this piece of real estate. About five years ago, it was sold for $550,000, then flipped for $750,000 a year later. At the time of the second sale, the rent jumped such that he left the first floor of what had always been a three-floor shop and retreated to the second and third. Plans call for the building to be auctioned for a price estimated at $1.2 million, undoubtedly further increasing rents.
All that has left its impression, though he acknowledges rent is far from the only problem. ''I think the city is in the grip of real-estate dealers,'' Mr. Caron said. ''It's killing everybody.''
His are the tales of a hunter. He remembers buying his first copy of James Joyce's Ulysses near Times Square for $1. (''The Random House.'') He remembers how his heart raced when he found a perfect first edition of Ernest Hemingway's second book, ''In Our Time.'' He rues the day he turned down a chance to buy a crate of limited editions of Faulkner's novels for $500. They might draw $100,000 today.
And he travels back over the years to a happier time when a subway ride cost a nickel and you could spend a heavenly day in the Third Avenue junk shops. He tells of walking barefoot at 11 P.M. across Central Park, and having a policeman admonish him to go home and put his shoes on.
The phone rings. Somebody asks when the Isaac Mendoza Book Company is closing. There is a long pause. ''Do you mean tonight or forever?'' Walter Caron asked.
Posted by Kurt Zimmerman at 12:11 AM