"The Greatest Collector of Books the World has Ever Known"

Stupendously miraculous things can happen to a book collector without warning. On an unseasonably hot October day the package arrived, signature required, and I wasn’t home.   The mail delivery notice was stuck firmly to the front door and I didn’t recognize the sender’s name from any of my recent book purchases.  My faithful mail lady greeted me the next day.  I said no I hadn’t gone to the post office to pick up the package.  So, we arranged for delivery, talked of her pending retirement in two weeks after thirty-six years of service, and I became a bit wistful.  Would the next mail person be so package friendly?
But I’m getting ahead of myself and miracles have beginnings.  I first spotted the object of my desire in a Dawson’s catalogue in 1996.  The venerable Los Angeles antiquarian firm had acquired portions of the library of Edwin Carpenter, Jr. (1915-1995), historian, librarian, bibliographer, and notable book collector.  Carpenter was associated with the Huntington Library much of his career.  He collected a wide range of subjects.  His favorite was bibliographic association copies—a kindred spirit!   He had a special affinity for Henry Wagner, Henry Harrisse, and Wilberforce Eames, for example.  Carpenter talks at length about his career and collecting in Ruth Axe’s interview Education of a Bibliophile: Edwin H. Carpenter published by the Oral History Program at UCLA in 1977.

I had stumbled across the Dawson’s catalog weeks after it came out and I didn’t have much money to work with anyway.  It was torturous browsing.  The Wagner collection was there and magnificent.  But the jewel in my mind was A.S.W. Rosenbach’s first book Unpublishable Memoirs (1917) inscribed to Henry E. Huntington.  Extraordinary! The price was $100.  Even then, I thought this absurdly cheap for an association copy that linked arguably the greatest American book collector with the most famous American bookseller.   The two men formed a close bond while Rosenbach gathered and Huntington acquired whole collections of rarities.   Huntington felt the footsteps of time and acted accordingly and decisively in his last decade.  Rosenbach rose to the occasion time and again with magnificent material.  Donald C. Dickinson’s Henry E. Huntington’s Library of Libraries (1995) provides details of that heady period.
Rosenbach himself wrote a tribute to Huntington published in the October 1927 Atlantic Monthly, “Mr. Henry E. Huntington was without a doubt the greatest collector of books the world has ever known.  Without possessing a profound knowledge of literature or of history, his flair for fine books was remarkable.  His taste was sure, impeccable.  The library at San Gabriel, California, which houses his wonderful collections, will be the Mecca of students for all time.  No gift to a nation or to a state can ever equal his.  America does not appreciate it today, but, as time spins its web and the world becomes better acquainted with the Huntington treasures, this fact will be adequately recognized.”
I made the call to Dawson’s and got the answer I expected: sold.  And I had no luck tracking down where the Unpublishable Memoirs went.  I just knew that somewhere out there it was on the wrong shelf, unhappy to be there, and really wanting to be with me.  Or so I thought.  Years went by and I gathered many choice Rosenbach association items, including examples of the Unpublishable Memoirs.  Yet each acquisition gave me a mild ache and I thought once again of the Huntington copy.  I must admit that upon reflection, I strove in-part to build up my Rosenbach holdings in numbers so strong they might match this one magnificent association in significance. And I did eventually, I think, but I still often dreamt about this particular book.
In 2001, I was e-corresponding with Donald Dickinson (1927-2016), the author of the Huntington book above, as well author of Dictionary of American Book Collectors and Dictionary of American Antiquarian Booksellers.  He wrote other biblio books including a biography of John Carter.  We certainly had common interests.  We emailed regularly and we would fill each other in on recent acquisitions, bibliographic bypaths, and the latest book news.  After his death, I wrote a tribute to him.  I still miss our interaction.
At this point, it is best to simply quote from our correspondence:

About 5 or 6 years ago. . . I came across a Dawson’s catalogue of Edwin Carpenter’s collection.  The catalogue was a month or so old and my call to order Rosenbach’s Unpublishable Memoirs inscribed to Huntington was unsuccessful. Priced at only $100, it must have been one of the greatest association bargains of all time.  Perhaps it will resurface, and I’ll get another shot.

Isn’t this the wonderful part of collecting – when things come together.  I am the owner of Rosenbach’s Unpublishable Memoirs inscribed to HEH. This is my story.  I called Dawsons when I saw it listed and they said sorry, already sold.  I said if it sold to a dealer would you see if that person would care to re-sell – they did, he did and I did.  I paid $125 to a dealer in Los Angeles, can’t recall his name and you are right – it’s one of the best association items I can imagine AND it has a small stamp in the inside back cover “HEH DUP” meaning of course, that they already had an inscribed copy and they put this one in their dup. room (Hey, why have two inscribed copies of the same book???) where dear old Ed Carpenter found it and bagged it.  The whole thing is amazing—for the library to let it go – for it to turn up in a Dawson catalog, for you to have wanted it and for me to have managed to get it.  The book, by the way, is in nice condition and the inscription reads, “Mr. Henry E. Huntington with the warm regards of A.S.W. Rosenbach.”  Don.

You are my new best friend in the whole world! :-)  Amazing story. Particularly in that you missed it also but were able to retrieve it.  I am glad the book is in appreciative hands.  If you ever decide to part with it, PLEASE let me know.  The book would fit perfectly into my collection.

When I read Don’s revelatory reply my surprise, elation and envy all reached Olympic levels.  I’m sure he enjoyed writing it.  Now that I knew the book’s whereabouts, I didn’t obsess about it quite as much.  However, this didn’t stop my regular reminders to Don to think of me should he ever tire of the book.  But he never did, and I don’t blame him.
Ah, yes.  Back to the package and 2019.  The sender was J. Dickinson and I rather casually opened it.  Before it was halfway out of the mailer, I recognized the cover and the sender’s name clicked, and I KNEW.  I stopped for a moment to compose myself then gingerly slid the book out the rest of the way.  I opened the book and gazed at the inscription for quite some time, making sure it wasn’t a mirage. 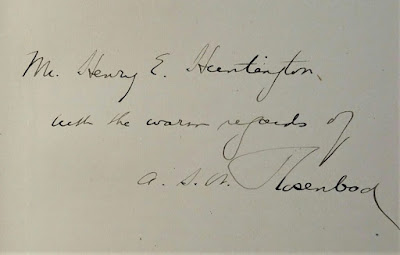 A note laid into the book read:  “Dear Kurt, My sisters and I would like you to have this / these Unpublishable Memoirs – in honor of our father, Donald C. Dickinson, whose bibliomaniac tendencies you seem to share, and in thanks for the lovely memorial piece you wrote about him. Sincerely, Jean Dickinson and Ann D., Ellen D., Mary D., Katie Manns, Sheila D.”
I began my own sharing of the news with various biblio-friends.  It was as if my wife and I had just announced a new baby.  I thought perhaps I should retire from collecting with this acquisition and call it day.  But the thought was fleeting and spurious and later that night I was on Ebay, the hunt continuing in earnest.  Just as I imagined Rosenbach, Huntington, Carpenter, and Dickinson would have wanted it.

I contacted the Huntington Library and they confirmed the presence of another copy, inscribed by Rosenbach, probably at a later date, adding “To the Greatest of All Bibliophiles.”

I wrote a blog essay in 2016 about the history of Rosenbach’s Unpublishable Memoirs and detailed the other association copies of the book in my collection.
http://www.bookcollectinghistory.com/2016/12/asw-rosenbachs-unpublishable-memoirs-on.html

The interview with Edwin H. Carpenter, Jr. can be found here.  The interviewer was Ruth Frey Axe, Henry Wagner's long-time assistant and biographer.  Carpenter deserves not to be forgotten.
https://archive.org/details/educationofbibli00carp

My tribute to Don Dickinson can be found here.
http://www.bookcollectinghistory.com/2017/03/donald-c-dickinson-tribute.html
Posted by Kurt Zimmerman at 12:41 AM