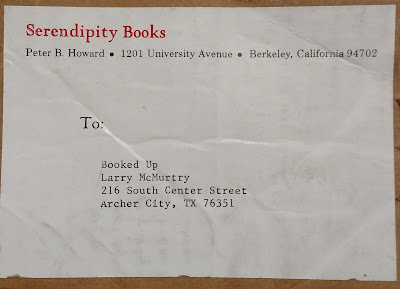 For the past seven years the heavy box has held miscellaneous issues of The Papers of the Bibliographical Society of America.  The material falls within my collection’s gray area: worth keeping and dipping into for reading / reference but not worth taking up shelf space.  So occasionally the box and others containing similar material get shuffled around for one reason or another.   Today was such a day.  Sweaty, hot work in the attic.  A pause and wipe of the brow and a glance at the label on the box.  Lo, we have something here!
The mailing label is addressed from Peter B. Howard (d. 2011), iconic rare bookman in Berkley, California to Larry McMurtry at his store Booked Up in Archer City, Texas.   What the box originally contained is unknown.  I utilized the box among others to pack my winnings after the McMurtry auction of stock in 2012.
This unusual association item brought back memories.   I spent time with the idiosyncratic and brilliant bookseller Peter Howard during several visits to his shop, Serendipity Books. He was a prime driver over four decades of modern literature collecting, both books and archives, issuing catalogues and developing major collections.  Larry McMurtry I know less well but I enjoyed a couple of entertaining discussions with him, particularly at the well-publicized 2012 auction of an estimated 300,000 volumes of stock from his sprawling book emporium in Archer City.  Illness issues and a lack of a book heirs drove his decision to sell.  He continues as a bookseller but in a much more streamlined mode.  McMurtry is most famous as a writer but he has bought and sold used and rare books in huge gulps over an extended career as bookseller and book scout.   I’ve written previously about both men in the essays linked below.
The mailing label deserves preservation.  It represents two well-known American bookmen plying their trade.  It conjures the imagination of the exchange. It’s ephemeral and displays well.  And if one adds historical perspective, how many similar associative labels from years ago survive?  But I’m not here to provide justification only a few thoughts.  I carefully remove the label and place it in a mylar sleeve, a story to a share.