Wilmarth Lewis’ classic autobiographical account Collector’s Progress is well represented in my library in multiple association copies, many important, but none as charming as this example.  I purchased the book recently on Ebay for a nominal sum using Ebay “bucks” – in effect rewards credit for other purchases—that was about to expire.  Use it or lose it.  The recipient was not noted by the seller but the price so tempting I ordered it on a whim and let the dice roll. . . .

Inscribed, “To John Thorpe (who came to all three of my Sandars Lectures) with every good wish for his collecting, Wilmarth Lewis, Room 4, Mill Lane, May 9th, 1957.” 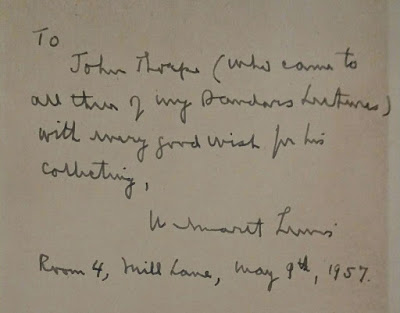 Lewis writes in One Man’s Education, “In 1957 [Lewis] became the Sandars Reader in Bibliography at Cambridge, the second American to be elected to the Readership since its establishment in 1895.  A liberal interpretation of ‘bibliography’ was necessary to make him eligible, but he felt safe in his subject, ‘Horace Walpole’s Library.’  The Reader spent six months on each of the three lectures, which were given on successive days at five following tea, the ideal hour for lectures in England when the audience is cheered but not inebriated. . . The audience got to nearly sixty each day; very good, the Reader was told, for a Sandars Lecture.
“There were no undergraduates, but there was a boy in the middle of the third row wearing a school blazer, his cap over one knee.  Lewis could not imagine an American boy going to such a lecture.  He was in the same seat the second day, leaning forward eagerly.  Lewis asked Creswick later who he was and learned that his name was John Thorpe, that he was an ardent book collector who did the best he could on his allowance of a shilling a week, and that his father was at Cambridge on sabbatical leave from Princeton.  After the third lecture John walked with the Lewises to a sherry party given for them by the Vice-Chancellor in the Old Library.  Creswick kindly pushed his bike along the King’s Parade so that he could talk about his collection to Mr. Lewis.  At the party the latter learned what it is like to be proud of a thirteen-year old compatriot.  John was exactly right, not embarrassed, not precocious.  He had a question for Annie Burr.  ‘Mrs. Lewis, do you mind Mr. Lewis collecting books?’  ‘No, John, I don’t.  Do you think it would make any difference if I did?’  ‘No, ma’am, I do not.’”
Posted by Kurt Zimmerman at 10:12 PM