I’ve been collecting Latin American Literature for thirty years and I like to keep an eye on the market.  An ABE online want notifies me of signed Pablo Neruda items.  A purportedly inscribed copy of We Are Many (London: Cape Goliard Press, 1967) popped up for sale the other day.  The bookseller was in England and the price ca. 250 US.  Quite a deal if true. But alas, the inscription is a facsimile found with all copies in wrappers.  The front wrapper and reproduced inscription on the rear wrapper is as follows: 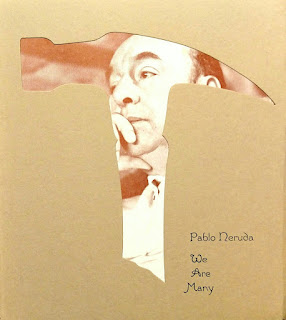 I took a minute to send a friendly note letting the bookseller know it was a facsimile.  I expected no reply.  However, I got one in short order.  The bookseller wrote:

Hello Kurt,
Thank you very much for your contact overnight via Abe – and your helpful advice re facsimile text on the rear cover of the 1967 Cape Goliard 1st edition of the above book. Very timely. I have received an overnight order for this item from a customer in CA 91730 and I will mention my omission of the facsimile nature of the text to him before concluding the sale.

I was appreciative of the response and glad to help.  However, not only was the book mistakenly described but also someone in California ordered the book looking for a bargain and apparently was as naïve as the bookseller.  This got me thinking about the whole scenario.  How does a bookseller mis-identify an item and then top that off by massively under-pricing it under the assumption it is authentic?  How does a buyer (collector or dealer, presumably?) plunk down a quick $250 on an item without doing a little homework of their own?  Are there lessons to learn here?

I pulled up available copies of the English edition of We are Many to see if other booksellers mentioned the facsimile inscription.  The wrappered issue was printed in an edition of 1,400 copies so the book is fairly common.  The US edition published the following year is of similar design and has the facsimile inscription.  There are approximately twenty-five copies of the various issues present.  A copy like the one offered by the mistaken bookseller can be had for $25-50.

Presumably, you’d be an excited bookseller to find an inscribed Neruda item.  You’re not going to dartboard a price.  You’d hopefully take a bit of time to search for comparables, right?  You run the same online search as I did or some version of it.  A couple of sellers mention the facsimile inscription.  One copy appears early in the list when sorted by price ($19) and the description clearly states “There is a print of a signed note in English - in Neruda's handwriting - to Ted Hughes, on back cover. “

The bookseller disappointment would now be palpable and understandable.  Typically, this would result in the book being placed back in the general bin or cataloged at a modest price.  But somehow, this doesn’t occur, and the bookseller begins to formulate a price assuming the inscription is authentic.

If one takes a few seconds longer and scrolls down through available copies they will encounter another issue of the book in hardcover limited to 100 copies signed by Neruda and the translator.  Now there’s a book! -- or relatively speaking at least in comparison to the regular unsigned, wrappered issue.  Multiple copies of this signed issue are available for $1,000 +.  It is not rare, but it is expensive.

The bookseller holds in his / her hands an example in wrappers with an apparently unique inscription mentioning Ted Hughes, etc. and can see (or should) that the basic signed, limited edition goes for over $1,000.   And they somehow arrive at a price of $250.

But all is not on the bookseller.  The buyer also apparently didn’t take a minute to investigate this bargain.  Do they really trust that the bookseller’s description is sound when the item has been woefully underpriced?  Are they a beginning collector who has not studied their area of interest? Or are they a generalist / reseller who thinks a steal is in order? Perhaps the 250 price is McMoney after a good day on the stock market and the book a gift for a spouse or friend and no worries about whether it is right or not.

I don’t know the answer and I probably won’t know.  I’m simply passing on the experience to allow my readers to ponder and have it serve as a reminder, a lesson, or a point of departure on a longer discussion.

Pablo Neruda. “Nothing More” (from We Are Many)

I made my contract with the truth
to restore light to the earth.

I wished to be like bread.
The struggle never found me wanting.

But here I am with what I loved,
with the solitude I lost.
In the shadow of that stone, I do not rest.

The sea is working, working in my silence.

Posted by Kurt Zimmerman at 6:27 PM