With Neither Rhyme Nor Reason? 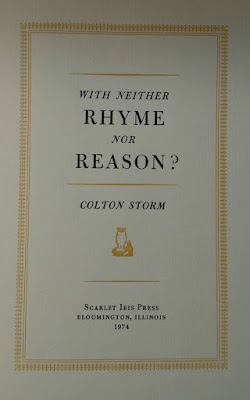 Recently arrived is Colton Storm's With Neither Rhyme Nor Reason?  (Bloomington, IL: Scarlet Ibis Press, 1974).  The essay was originally delivered as an address before the Friends of the Milner Library On the Occasion of Their Spring Meeting, 7 May, 1973.  The address was published in an edition of 300 copies.  The other copies I've seen for sale or cited were in wrappers.  This example is in hardcover.  What percentage of the 300 examples were hardbound is unknown but apparently small.  But that is a collector talking.  More important is the essay itself.  Storm was a rare bookman for over forty years and had an uncommon command of words.  It is a pity he didn't write more.  His most well-known publications are an Invitation to Book Collecting (1947), co-written with Howard Peckham, and as the compiler of  A Catalogue of the Everett D. Graff Collection of Americana (1968).

His thoughts on book collecting have given me unexpected pleasure this evening.  I'd like to share the end of his address:

"Book collecting, the pursuit of a passion, can be an expensive avocation, or it can be a pleasure enjoyed with no great cost save in human energy.  But whether it is a game played in the grand manner, or as a simple pastime, the collecting of books as treasures is deeply satisfying to the active mind.  The man who is alive to all that moves about him in this complex world cannot complete his day's occupation, remove all thought from his mind, and become quiescent; he must employee his unceasing need for mental & physical activity either in a continuation of the day's business or in the pursuit of a wholly diverse hobby.  The rewards of book collecting are very great.  The uncultivated mind is an asset neither to its owner or to its owner's associates.  Be generous to yourself and your friends--be a book collector."
Posted by Kurt Zimmerman at 10:27 PM